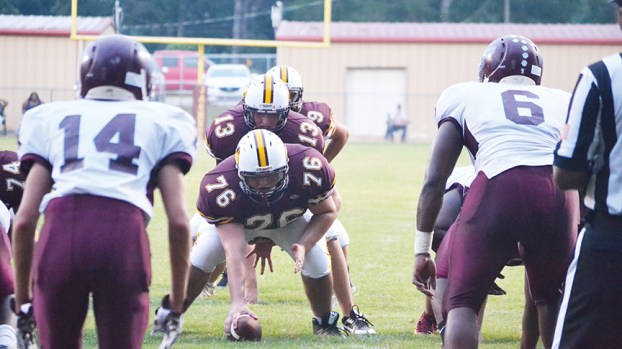 Josh MIlholen (76) of Enterprise snaps the ball to Luke Burns (13) in the Yellow Jackets’ 33-16 loss at home to Puckett Friday night. (Photo by Matt Rushing)

The Enterprise Yellow Jackets faced off at home Friday night against the Puckett Wolves. The Jackets wanted to keep their record untarnished. The Wolves wanted to make some headway for the season.

At the end of the first quarter, neither team had put any points on the board, but both had been successful in denying their opponent’s attempts to do the same.

A third of the way into the second quarter, Puckett scored a 20-yard touchdown to get on the board. The point after attempt was no good and Puckett kicked off to Enterprise with a 6-0 lead.

Enterprise entered the half down 14-0. After the half, Puckett wasted no time in upping their lead to 21.

Once the fourth quarter got underway, the Yellow Jackets got back in the offensive part of the game. Quarterback Luke Burns completed a 55-yard pass to outside linebacker Jordan Stephens to get the home team on the board. After a good two-point conversion, Enterprise trailed 8-21 with right at nine minutes left on the clock.

Puckett responded with another TD, though the PAT was no good. Puckett led 27-8.

A late touchdown run by Tailor Young ended the game with Puckett on top 33-16.

It was a joyous ride home from Tylertown Friday night for the West Lincoln Bears after a slamming down a... read more