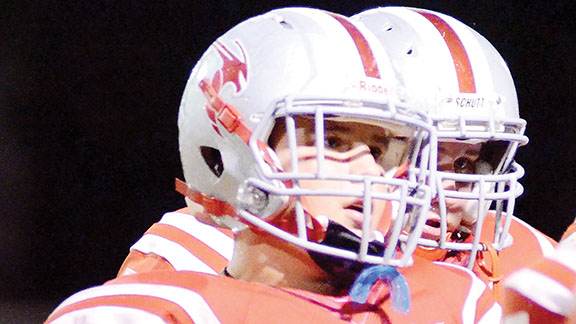 Rials Hester of Loyd Star (65) hops into the huddle in a game played earlier this season. (File photo)

The Loyd Star Hornets controlled the game from whistle to whistle Friday night as they took home a 24-8 win over the McLaurin Tigers on the road.

The win was the first of the season for the Hornets (1-1) and gave first-year head coach Brian Ford his first win at Loyd Star.

One Patrick Price rushing touchdown and two more by Zack Baker put Loyd Star up 18-0 at the half. Coach Ford challenged his team in the second half to finish the game with more solid defense and strong rushing.

“I told our kids at halftime you’ve got to be a hammer to drive a nail and in the second half we played like a hammer,” said Ford.

The Loyd Star defense was bend-don’t-break all night and didn’t give up a touchdown until 10:37 remained in the game. McLaurin scored a two-point conversion to cut the Hornet lead to 18-8. Late in the game the Hornets were forced to punt inside Tiger territory and a perfectly executed quick-kick buried McLaurin inside their own 10-yard line.

“Dane Smith had a great pooch-punt for us that put them in a deep hole on their final drive,” said Ford. “I was really proud of how we executed late.”

McLaurin would struggle to move the ball in the shadow of their own goal posts and would see Loyd Star’s Desmond Berry return the subsequent punt deep into their territory. With three minutes remaining in the game and on a fourth and goal, Berry would score and give the Hornets their final margin of victory.

The Brookhaven Academy Cougars have climbed out of the pit with a victory over Trinity Episcopal. Coming off a losing... read more