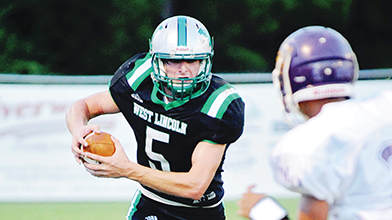 Gabe Nations of West Lincoln (5) turns up field with the football in their 26-20 loss to Mount Olive last week. (Photo by Teresa Allred)

It was a joyous ride home from Tylertown Friday night for the West Lincoln Bears after a slamming down a 43-20 win against the Salem Wildcats.

The Bears hit the field in the away game determined after a heartbreaking 26-20 loss to the Mount Olive Pirates in the first game of the season.

And in their second attempt at a first win, they certainly delivered.

“We corrected some mistakes from the first game,” head coach B.J. Smithhart said. “They played a little bit better and they played hard. They did well.”

Smithhart was pleased with the performances of Ledarrius Jones, Gabe Nations and Chase Owen throughout the game.

The win also gives the West Lincoln Bears their first win under Smithhart.

West Lincoln takes on the Puckett Wolves at home Friday. Kickoff is at 7 p.m.

The Loyd Star Hornets controlled the game from whistle to whistle Friday night as they took home a 24-8 win... read more