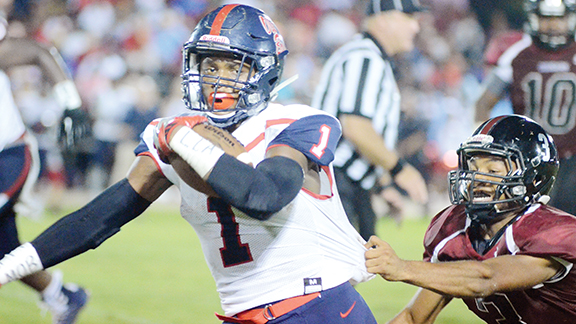 What we learned from week two of the football season

Week two is officially in the books for the 2017 high schools football season in the state of Mississippi.

Plenty of the local teams got on track this week and got in the win column for the first time this season. Some local teams struggled against tougher opponents, but put up a good fight even in losses.

Brookhaven made a statement in its 41-14 rout of rival Lawrence County while the Brookhaven Academy Cougars got their first win in 24 games under head coach Ron Rushing.

Here’s what we learned from week two of the high school football season.

After a draining loss to Pearl to open up the season, the Panthers rebounded in a big way and put on an offensive clinic against the rival Lawrence County Cougars.

Junior quarterback Sevante Quinn and senior running back Damarrell Leggett were the stars of the show for Brookhaven and led the team down the field on numerous scoring drives.

Besides an interception near the end of the first half, Quinn was almost perfect as the junior tossed two touchdown passes. Leggett had two rushing touchdowns in the first quarter to seemingly put the game away early.

The offense moved the ball down the field with ease, putting up six touchdowns in the first three quarters.

The defense shined as well, posting a shutout through the first three quarters.

Senior Jemaurian Jones made his impact on the game with a pick-six to end the first half to put the Panthers up 27-0 at halftime.

The Panthers showed everyone they’re ready to compete with anyone through the first two weeks and welcome any challenger that steps in its way.

No more curses for BA

It was a long 24 games without a win for Brookhaven Academy, but the Cougars got the job done Friday night in their road win over Trinity Episcopal 41-40.

Rushing had some tricks up his sleeves and pulled all the stops Friday night in order to break the losing streak. The team never quit and pulled out their first win in almost two years.

The Cougars showed the will to win and the fight to turn things around Friday night. Expect their win to propel them the rest of the season.

West Lincoln is for real

It was a complete performance on both sides of the ball for West Lincoln in their 43-20 win over Salem.

It was the first win under new head coach BJ Smithhart as he looks to turn West Lincoln back into a winning program.

The offense got a strong rushing performance from sophomore Michael Brothern with seven carries for 117 yards. Junior quarterback Matthew Case also played a great game with 132 passing yards and 56 rushing yards with one passing and one rushing touchdown.

The defense only gave up six points in the first three quarters and flew to the football.

With depth on defense and plenty of playmakers on offense, Smithhart and West Lincoln could be in for a turnaround season.

The Wesson Cobras got in a early 14-0 hole Friday night at Sumrall and couldn’t dig themselves out of it in a 35-21 loss.

Junior quarterback Billy Garrity for Sumrall went 14-18 passing with 203 yards and one touchdown on the night. The offense as a whole put up 455 total yards on the Wesson defense and the Cobras couldn’t get off the field.

Senior Dale Thigpen did everything he could to keep the Cobras in the game with 51 passing yards and 153 rushing yards on 22 carries and two scores.

The defense has the capability to get stops, but it just didn’t happen Friday night.

Wesson’s hopes for a perfect season are gone with Friday’s loss to Sumrall, 35-21, but they’re planning to work hard to make... read more