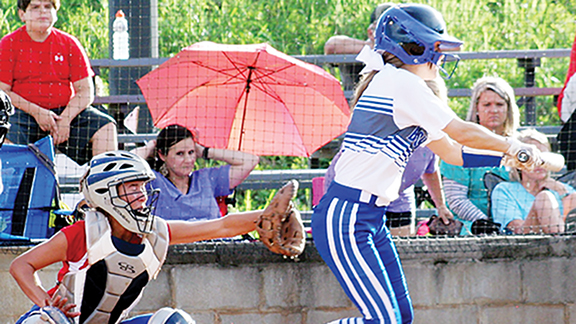 The Brookhaven Academy softball team hit a rough snag in its season recently by dropping two out of three games over the weekend and fell to Newton County Academy Monday night by a score of 6-1.

The 1-3 stretch for the Lady Cougars drops them to 8-8-1 overall on the season.

“We are struggling a little offensively right now and it’s been difficult to get in rhythm with the rain, but I’m very optimistic about the next games,” Brookhaven Academy head coach Becky Flowers said. “We are pitching well and defending well.”

The Lady Cougars fell in an early hole Monday night and couldn’t come back from it in its 6-1 loss to Newton County Academy.

Despite out-hitting the Lady Generals 6-to-3 in the game, Brookhaven Academy couldn’t bring runners home and NCA made the most of its chances at the plate.

The Lady Cougars took the lead in the top of the first with an RBI bunt single from sophomore Julie Anna Bartram to give them the early 1-0 lead.

A hit-by-pitch and a fielder’s choice got Newton County Academy on the board and gave them a 2-1 lead in the bottom of the second inning.

The lead increased for Newton in the bottom of the fifth inning thanks to a three-RBI double followed by an RBI groundout to hand BA the 6-1 loss.

“We had an overall bad night at Newton,” Flowers said. “We left runners in scoring position and we made errors on defense and didn’t give our best performance.”

In the first game of the Parklane tournament Saturday morning, the Lady Cougars lost on a walk-off to start the day against Parklane Academy 2-1.

With a 1-0 lead for the Lady Cougars heading into the final inning of play, three walks and two RBI singles gave Parklane Academy the walk-off victory.

The pitching was strong on both sides as Smith pitched a strong game for Brookhaven Academy. She went 3.1 innings, giving up two earned runs on three hits, three walks and striking out five. Freshman Abeni Fuller led the Lady Cougars going 2-for-2 at the plate with the lone RBI.

Thanks to a complete game shutout from Felder, the Lady Cougars got back on track with a 2-0 victory over Glenbrook Saturday.

Felder was dominant from start to finish, giving up no runs on two hits, no walks and one strikeout.

The game was locked at 0-0 through the first four innings until a two-RBI single from Kailyn Jordan gave the Lady Cougars the late 2-0 lead with one half-inning left.

Felder handled business from there and kept Glenbrook off the board to seal the win.

Jordan led the team at the plate, going 1-for-3 with two RBIs. Felder, senior Cameron Watson and eighth-grader Madison Moak each had one single to round out the hitting total.

The woes continued for Brookhaven Academy as the team dropped their second game of the tournament to Oak Forest Academy 7-2.

Oak Forest scored five runs in the first two innings to put the Lady Cougars away. The offense struggled for Brookhaven Academy with only one hit from Jordan on the day. Jordan went 1-for-2 at the plate to lead the Lady Cougars.

Smith pitched five innings for Brookhaven Academy, giving up seven runs on nine hits, no walks and one strikeout.

Raelyn McDaniel pitched well for Oak Forest, giving up two runs (none earned) on one hit, no walks and one strikeout.