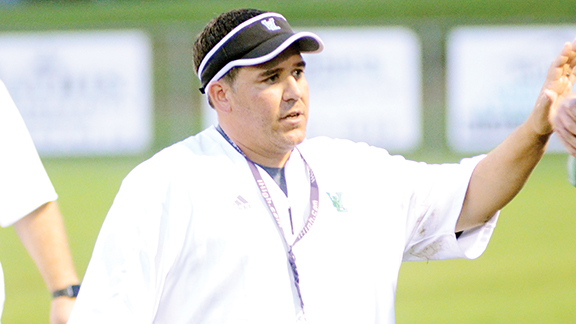 Above: West Lincoln head coach BJ Smithhart gives directions on the sidelines during their scrimmage against Wesson earlier this season. (Photo by Dylan Rubino)

After suffering disappointing losses to start their head coaching careers in Lincoln County, BJ Smithhart of West Lincoln and Brian Ford of Loyd Star both picked up their first wins of the season Friday night.

West Lincoln throttled Salem 43-20 and Loyd Star grinded out a 24-8 victory over McLaurin.

Both Smithhart and Ford come with winning pedigrees as head coaches at the high school level in Mississippi.

Smithhart spent nine years as the head football coach at St. Aloysius in Vicksburg and his coaching career included two district championships and one appearance in the state championship game for the Golden Flashes.

The head coach led St. Als to a 14-2 record in 2014, the best in school history, and reached the state championship game for the first time since 1981. Smithhart finished his career 54-54 overall for the Golden Flashes.

Smithhart was aware of the support that West Lincoln gets for its athletics and the opportunity to coach in Lincoln County was one he couldn’t pass up when made available.

“I heard they were a program that’s on the upswing and I know they’re ready to do some great things,” Smithhart said after taking the coaching job.

After a tough 26-20 loss to Mount Olive to open his West Lincoln tenure, the Bears bounced back in a big way on both sides of the ball and raced past Salem 43-20.

A strong ground attack, led by sophomore Michael Brothern with seven carries for 117 yards, got the Bears their first victory under Smithhart.

With two-way players all around the roster, including seniors Chase Owen, Brandon Smith, Gabe Nations, Ledarrius Jones and Julian Anderson, the new head coach is on the right track to build a winning program and that all starts with a successful 2017 season.

The rebuilding project is a little bit more difficult for Ford at Loyd Star as the team lost 11 seniors from the year before.

After losing their season opener against Sacred Heart, Loyd Star gutted out a 24-8 victory over McLaurin to give Ford his first win for the Hornets.

Ford is a man who has been around football for a long time with 18 years of coaching and 14 years as a head coach under his belt.

After spending the 2016 season as an assistant coach at Hattiesburg High School, the opportunity came up at Loyd Star to be the head coach and Ford knew it was the right move.

Led by senior running back Patrick Price, the Loyd Star Hornets were able to get Ford his first win with the Hornets.

During his winning days at Lumberton, Ford based his teams around a strong running game and a physical defense that can win you the game.

That’s exactly what Loyd Star did Friday night and Ford hopes his team can continue doing the same thing in the coming years.

Friday night was a special one for both Smithhart and Ford and the winning pedigree and experience that both men bring to the table will help each program down the road.

West Lincoln returns home to face Puckett and Loyd Star hits the road to face Salem. Kickoff for each game is set for 7 p.m.

The 2016-2017 season proved to be one of the best in program history for  the Copiah-Lincoln Community College golf team.... read more