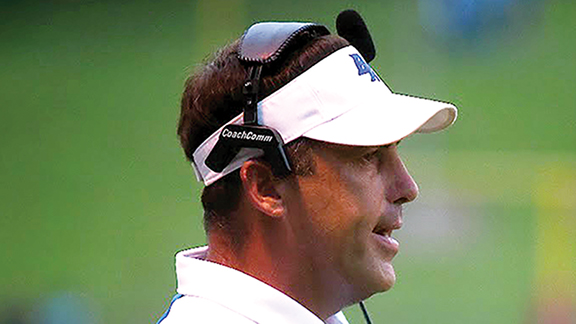 Ron Rushing looks towards the field in their win Friday night. (Photo from The Natchez Democrat)

It took longer than expected, but Brookhaven Academy head football coach Ron Rushing got his victory for the Cougars Friday night against Trinity Episcopal.

It was a long time coming for the former Cathedral High School coach. It took 24 games to get his first victory, but the monkey is finally off his back.

Rushing knew what he was getting into when he first took the job. He wanted to bring back the winning culture that the Cougars once had.

“They called me, and they wanted to build their program back up,” Rushing said about taking the Brookhaven Academy job. “They’re really dedicated to getting it back to where it should be. I’m excited about the challenge and looking forward to the opportunity.”

Rushing brought in a winning pedigree from Cathedral High School, so the rebuilding situation was completely new to him.

Rushing owned a 60-17 overall record after a successful six-year run as the head coach, including three MHSAA region titles and a 2014 MHSAA class 1A state championship for the Green Wave.

Rushing inherited a Brookhaven Academy program that was on a 14-game losing streak when he took the job in 2016. The program got off to a rough start last season, going winless at 0-8 and having to forfeit their final two games due to not having enough players to play because of injury.

The culture started to change in the offseason with Rushing recruiting students from other athletic teams at Brookhaven Academy to come play football. That process worked out and with a roster of 35 players, the Cougars fought hard for their first win Friday night for Rushing.

“We would like to be in the playoffs and extend our season this year,” Rushing said over the summer. “Regardless of how last season went, we still have the same expectations. We’ve got a lot of good athletes back and as far as athletic ability, we’ll be good at that. We’re excited.”

The vision and work that Rushing put into at his new job all culminated into one moment Friday night in his first victory at the helm of Brookhaven Academy.

In an up-and-down scoring fest, the game was trending toward whoever had the ball last was going to win.

Luckily, the Cougars had possession with time running out in regulation and took the lead for good with 14 seconds left on the clock. With the ball at the Trinity one-yard line, junior quarterback Dawson Flowers took the quarterback keeper and punched it into the end zone to regain the lead at 41-40.

The clock soon hit zero and the streak was over. It was the Cougars’ first win in 24 games and the goal that Rushing set back when he first took the job was finally met.

“It is going to happen,” Rushing said about turning Brookhaven Academy back to a winner. “I’m not sure when, but it will happen.”

Friday night was the first step in a long, drawn out process that Rushing envisioned when he arrived in Lincoln County.

The head coach has a good core of young players to build the roster around led by Flowers at quarterback, juniors Cade Brown, Sonny Singh, Nick Ogden and Justin Burt.

The road gets a little tougher starting this week with two more road games before returning home on Sept. 15.

The pressure was lifted off the shoulders of Rushing and the Brookhaven Academy football team Friday night and now the program can start to build the winner that Rushing has envisioned.

Plenty of more challenges will occur, but the Brookhaven Academy Cougars are now ready for what’s in store.

The Brookhaven Academy softball team hit a rough snag in its season recently by dropping two out of three games... read more