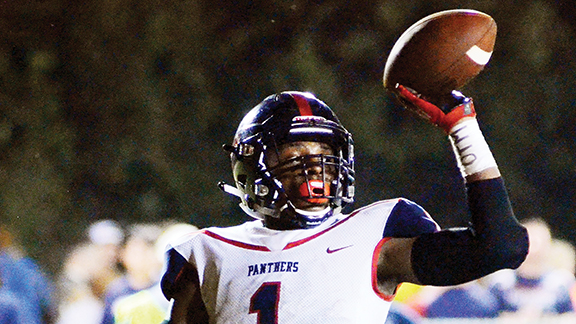 Damarrell Leggett of Brookhaven throws the ball to the referee in their 41-14 win over Lawrence County last week. (Photo by Dylan Rubino)

The road trips for football teams in the area continue in week three as six of the eight programs hit the road in crucial games.

The Brookhaven Panthers will look to build off their strong offensive performance from last week at Lawrence County. The Cougars travel to Raleigh, looking for their first win of the season.

West Lincoln and Loyd Star look to put together a winning streak after securing wins for their new head coaches last week.

It will be another eventful Friday under the lights for football in the area. Here’s what to look out for.

The Brookhaven offense exploded for six touchdowns in its 41-14 win over rival Lawrence County, led by junior quarterback Sevante Quinn and senior running back Damarrell Leggett.

The defense shined as well, shutting out the Cougars through the first three quarters of the game.

The Panthers face a tough road challenge against South Pike. The Eagles are coming off a tough loss to rival North Pike by a score of 36-26 after winning their first game of the season against Franklin County.

This will be the second week in a row for Brookhaven playing a 4A program and another good opportunity to showcase its offense. A complete performance would give this team momentum as they return home next week to face McComb.

The Brookhaven Academy Cougars are coming off a historic 41-40 win over Trinity Episcopal Friday night as they hit the road to face Clinton Christian tonight.

The monkey is now off their backs and now it’s time to build a program for the future.

Led by junior quarterback Dawson Flowers and junior wide receiver Cade Brown, the Cougars can light up the scoreboard and win in many different ways.

Clinton Christian is coming off a dominant 32-7 win over Greenville Christian and ran for over 350 yards in the game.

The defense has been impressive for Clinton Christian and has given up only 20 points in two games.

Brookhaven Academy is in for another tough road test, but the Cougars are more than capable of pulling off the victory.

What’s next for West Lincoln and Loyd Star?

BJ Smithhart of West Lincoln and Brian Ford of Loyd Star picked up their first wins at their respective schools Friday night and now have the task of making a winning streak.

The Bears have been competitive in their first two games and have made great strides as a team under Smithhart. Led by seniors Gabe Nations, Chase Owen and Julian Anderson, West Lincoln can put up points in a hurry and fly to the ball on defense.

Led by senior running back Patrick Price, the Loyd Star Hornets grinded out a 24-8 win over McLaurin and clamped down on defense to seal the deal.

Ford wants to grind out victories with a strong running game and a physical defense. That will be tested when they face Salem on the road.

After a week off, the Bogue Chitto Bobcats face off against the Wesson Cobras in a Lincoln vs. Copiah County showdown.

The Wesson defense struggled early on against Sumrall and the team couldn’t dig themselves out of the hole.

The Bobcats are coming into their matchup against Wesson with fresh legs and a new mindset after picking up its first win since 2015.

The No. 18 Copiah-Lincoln Community College Wolves open the 2017 season Thursday at 7 p.m. on the road against Mississippi Delta... read more