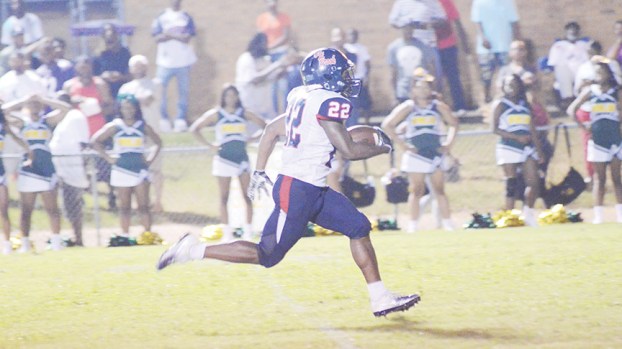 Brookhaven sophomore running back JQ Edwards races for the end zone for one of his three rushing touchdowns on the night in the Panthers’ 52-20 win over South Pike. (Photo by Dylan Rubino)

The offense for the Brookhaven Panthers led the way for the second game in a row thanks to a strong ground game, running past the South Pike Eagles by a score of 52-20 Friday night.

The win moves the Panthers to 2-1 overall as they return home to face McComb High School at King Field on Friday night. The loss drops South Pike to 1-2 overall on the young season. The win marks the second week in a row for the Panther offense scoring more than 40 points.

The running game led the Panthers past rival Lawrence County last week and that performance carried over into Friday night.

Leading the way for Brookhaven was sophomore running back JQ Edwards, who used his explosiveness and cutting ability to rush for three touchdowns on the night to propel the Panther offense. Senior running back Damarrell Leggett added another strong game to his resume with one rushing touchdown.

On the first offensive possession of the game for the Panthers, Leggett burst out for a long touchdown run, but it was called back due to a holding penalty. Senior kicker Tyler Mixon came on for the field goal and hooked it to the right.

Capitalizing on a turnover, the Panthers marched down the field and Edwards punched it in the end zone for the one-yard touchdown run to put Brookhaven up 7-0.

On their next offensive possession, Leggett took it in from the goal line to put the Panthers up 14-0 in the second quarter.

The Brookhaven Panthers gave up some explosive plays in the first half to South Pike. The first one came on a 70-yard touchdown run from sophomore quarterback Dontavious Turner to cut the Panthers’ lead to 14-6 with 8:13 left in the second quarter.

The Panthers responded with a long touchdown drive, capped off by a five-yard touchdown pass from junior quarterback Sevante Quinn to junior Dorian German to make it 21-6 Brookhaven.

On the next offensive possession, Edwards took off for another long touchdown run to put the Panthers up 28-6.

South Pike got on the board to end the first half with Brookhaven leading 28-12.

The Panthers’ defense clamped down and held the South Pike Eagles to only eight points in the second half.

Nearing the end of the third quarter, Edwards added on his third touchdown run of the night to put the Panthers up 35-12.

South Pike added on a touchdown late in the third quarter to make it 35-20 heading to the fourth quarter.

A field goal from Mixon and two touchdowns on offense sealed the victory for Brookhaven as the Panthers moved to 2-1 overall with a 52-20 victory.

The star of the game on offense was Edwards, who rushed for three touchdowns and dominated the football game from start to finish. Quinn finished the game with one touchdown pass and one interception.

The star of the game on defense was senior defensive back Jemaurian Jones, who picked off Dontavious Turner toward the end of the first half to give the Panthers good field position before the half ended.

The road trips for football teams in the area continue in week three as six of the eight programs hit... read more