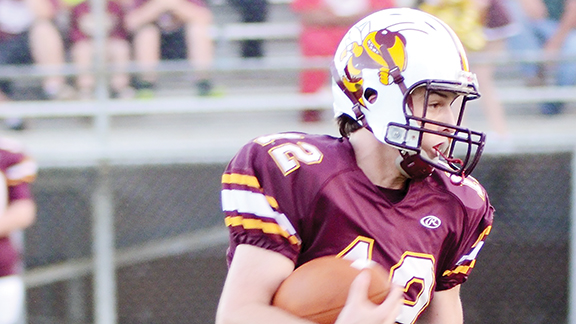 Tanner Waldrop of Enterprise runs the football in a game played earlier this season. (Photo by Dylan Rubino)

Coming off a tough home loss to Puckett last week, the Enterprise Yellow Jackets hit the road for the first time this season and couldn’t slow down Richton, falling by a score of 49-12.

The Rebels got off to a fast start in the first quarter and put Enterprise in a 20-0 hole. Quick passes to the wide receivers gave the Yellow Jackets problems on defense as Richton started putting long drives together.

Two touchdowns late in the second quarter put the Richton Rebels up 34-6 on Enterprise heading into halftime.

Sophomore running back Taylor Young punched it in for the late fourth quarter touchdown to cut the Richton lead to 42-12.

A late touchdown by Richton was icing on the cake as the Rebels dominated Enterprise and won the game by a score of 49-12.

The Bogue Chitto Bobcats traveled north Friday night to meet Wesson in Cobra territory. Going scoreless for much of the... read more