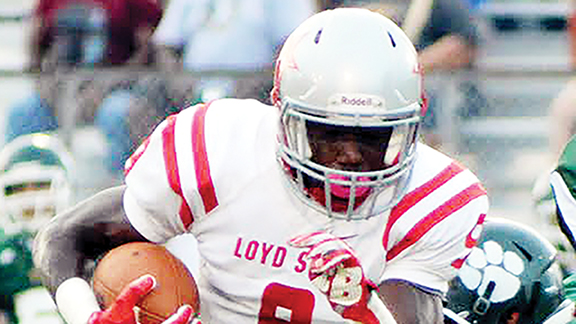 Patrick Price of Loyd Star runs through a McLaurin defender in their game last week. (Photo by Lydia King)

Points came early, often, and easily for the Loyd Star Hornets on Friday night as they thrashed the Salem Wildcats 47-20 on the road. The visiting Hornets put the game out of reach in a second quarter that saw a spastic scoring burst of a combined three touchdowns scored in less than a minute.

With the Hornets already leading 18-0 in the second quarter, the scoring blitz started when Loyd Star running back Desmond Berry tore off an 87-yard touchdown run that saw him breaking out of a pile of Wildcat defenders at the line of scrimmage. Berry would finish the night with three rushing scores.

The ensuing Hornet kickoff would then be returned for a touchdown by Salem that cut the Hornet lead to 24-6. Opposing team kickers have been hesitant to put the ball in the hands of the Hornet’s deep returners so far this season. Most times Loyd Star is forced to field low or short kicks aimed to keep the ball out of the hands of Patrick Price, Je’Mario Clay, or Berry. That strategy would hurt the Wildcats on the kickoff following their first score. Junior Jared Smith fielded a ball that angled away from Price and never let-up on a touchdown scoring 70-yard kick-return that put Loyd Star up 32-6 just before halftime.

“I thought our defense played really well in the first half,” said Hornets head coach Brian Ford. “In the second half we got to substitute some younger kids and get them experience, which is always a good thing,” said Ford.

Next up for Loyd Star (2-1) is a home date and the renewal of what was once a heated rivalry with the Wesson Cobras. The teams, former long-time members of the same district, last played in 2012, a game that Wesson won 39-7. Kickoff is at 7 p.m. at W.E. “Sambo” Smith Field.

Brookhaven Academy was on the road this week at Clinton Christian Academy to face the Warriors and came away with... read more