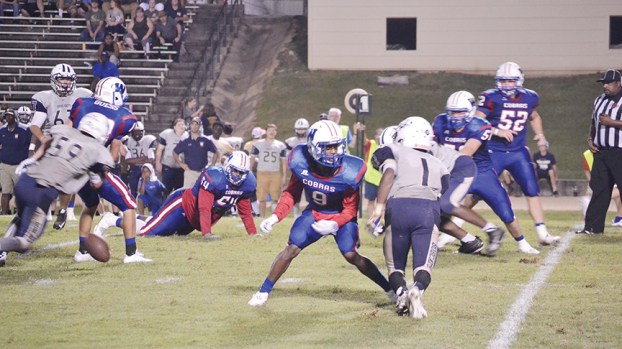 The Bogue Chitto Bobcats traveled north Friday night to meet Wesson in Cobra territory. Going scoreless for much of the first half, the Bobcats took their first loss of the season at home with a final score of 55-14.

Just two-and-a-half minutes into the first quarter, Wesson’s senior slot back Dell Thigpen scored an 11-yard rushing touchdown and a successful PAT put the Cobras at 7-0 to get the game going. Coach Jeremy Loy’s team followed it up with another score just two minutes later, when junior running back JaQuavion Harris carried the ball 35 yards to punch it into the end zone paint again. Tacking on another good point after, Wesson was now up 14-0.

With time running out in the first quarter, Harris took the ball again for a 51-yard touchdown run. The Cobras entered the second quarter with 21 unanswered points, and pushed again toward the goal line.

Thigpen took a 5-yard dash into the end zone and Loy’s boys put up another PAT to bring the Cobra lead to 35 over the Bobcats.

With only 13 seconds remaining in the first half, Coach Garreth Sartin’s ’cats were able to narrow the gap a bit when senior quarterback Trey Nettles took a 1-yard run to a touchdown. Tacking on a successful two-point conversion, the Bobcats went into halftime trailing 35-8.

With a halftime pep talk behind them, the Bobcats hoped to raise the score in their favor over the course of the second half and overtake Wesson on their home turf. But Wesson’s Harris shined once again with a 5-yard touchdown. The PAT was no good, but Wesson was up 41-8.

Two-thirds of the way into the quarter, senior running back Trey Glasper took his first run into scoring territory with a one-yard TD run, followed by another successful point after attempt. Wesson now stood a long 40 points ahead of Bogue Chitto, with the score 48-8.

Bogus Chitto was able to add six more points to the scoreboard in the fourth quarter, but it was not enough. Wesson’s junior wide receiver Victorian Edwards scored on a 12-yard rushing attempt and Wesson rounded out their score to 55-14 with only a minute and a half remaining in the game. It’s where the score would remain.

The offense for the Brookhaven Panthers led the way for the second game in a row thanks to a strong... read more