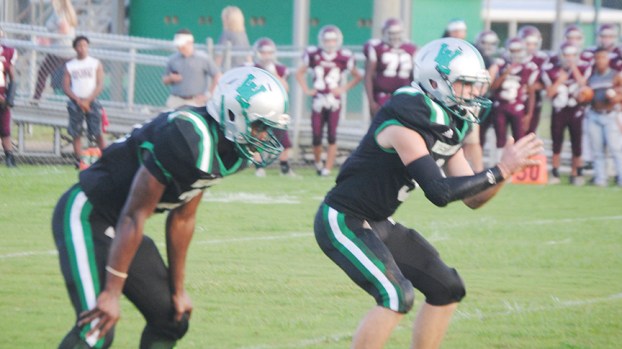 It may be too soon to call it a winning streak, but for head coach BJ Smithhart’s West Lincoln Bears, who are now 2-1 overall, it’s a good start.

The Puckett Wolves had come off a victory against Enterprise the week before, but the Bears stopped them in their tracks Friday night with a 26-24 defeat.

The Bears picked up their first win with Smithhart at the helm last week as the they hit Salem hard with a 43-20 loss. They got win No. 2 Friday with the win on Puckett’s home turf.

The Bears have made great strides as a team under Smithhart. Led by seniors Gabe Nations, Le’darrius Jones, Chase Owen and Julian Anderson, West Lincoln can put up points in a hurry and fly to the ball on defense.

They’ll try for their third win next week against the unbeaten Pelahatchie Chiefs in an away game that was moved because of the field conditions at West Lincoln. Kickoff is at 7 p.m.

Smithhart said is team is anxious to face the Chiefs. They’re looking forward to the challenge.

“They’re really good,” he said of the Pelahatchie team. “They’ll be the best team we’ve played so far.”

Anderson, a Bears linebacker and running back, planted wrong in the third quarter and twisted his leg. He was taken to the King’s Daughters Medical Center clinic and treated then released. Smithhart said the news was good and he expects Anderson to be back on the field against Pelahatchie.

He said Owens and Jones along with sophomore Grant Jackson and junior Cam Buckles made major plays.

“I’m proud of all of them. It’s a good night for everybody,” he said.

Points came early, often, and easily for the Loyd Star Hornets on Friday night as they thrashed the Salem Wildcats... read more