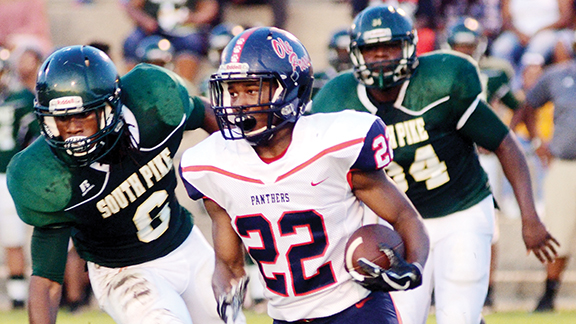 What we learned from week three of football season

Week three is officially in the books for the 2017 high school football season in the state of Mississippi and we learned a lot about the eight local teams.

The Brookhaven Panthers used their strong ground game to rush past South Pike 52-20. Lawrence County picked up its first win of the season with a 32-22 win over Raleigh.

West Lincoln and Loyd Star both own two-game win streaks as both schools picked up wins Friday night, while Enterprise lost big against Richton 49-12 and is forced to fight through a slew of injuries.

Wesson made easy work of Bogue Chitto and ran away with the victory 55-12 and Brookhaven Academy picked up its second straight win with a 34-6 victory over Clinton Christian Academy.

Here are the major takeaways from week three of the high school football season.

Another week and another dominant rushing performance for the Brookhaven offense. The Panthers ran for 354 yards on the ground and totaled 464 total yards of offense in their 52-20 win over South Pike Friday night.

The offense has been starting to click over the past two weeks thanks to a lethal ground attack, which led Brookhaven last year as well.

The passing game has also been making strides. Junior quarterback Sevante Quinn went 10-of-20 passing for 100 yards with one touchdown and one interception Friday night. Junior wide receiver Dorian German reeled in four catches for 48 yards and one touchdown.

Senior Jeffery Johnson led the Panther defense with seven tackles. Seniors Dahauntre Hill and Michael Stallings each had two sacks on the night.

The defense gave up some explosive plays to South Pike Friday night, but was dominant for the most part. If the offense can keep on producing points like it has been, Brookhaven will be hard to stop.

After not winning a game for almost two years, the Brookhaven Academy Cougars now own a two-game winning streak with a dominant 34-6 win over Clinton Christian Friday night.

Junior quarterback Dawson Flowers was the star of the show, going 15-of-22 passing for 274 yards and five touchdowns on the night.

Junior wide receiver Cade Brown had a monster game at receiver with nine catches for 202 yards and two touchdowns. Seniors Logan Murray, Tate Felder and Ethan Nations each had a touchdown catch as well.

The offense has been lighting up the scoreboard the past two weeks, led by the Flowers-to-Brown combination and they show no signs of slowing down.

The defense has been flying around to the ball as well led by juniors Nick Ogden and Cole Griffin.

Loyd Star scored three touchdowns in less than a minute in the second quarter to put away Salem on the road in their 47-20 road victory.

Leading the way for the Hornets was running backs Patrick Price and Desmond Berry, who each recorded rushing touchdowns in the contest.

Berry took off for an 87-yard rushing touchdown in the second quarter to lead the Hornet offense on the night. Berry finished the game with three rushing touchdowns. Junior Jared Smith recorded a 70-yard kickoff return score that put Loyd Star up 32-6 before halftime.

Strong play on defense and the ground game led Loyd Star once again. That philosophy will be tested Friday night as they host Wesson.

West Lincoln scored 18 points in the fourth quarter to squeak out a 26-24 win over Puckett Friday night.

Head coach BJ Smithhart has been getting great contributions from his two-way players and has built a strong team at West Lincoln in his first year as head coach.

West Lincoln faces a big road test this Friday night when they travel to undefeated Pelahatchie.

It may be too soon to call it a winning streak, but for head coach BJ Smithhart’s West Lincoln Bears,... read more