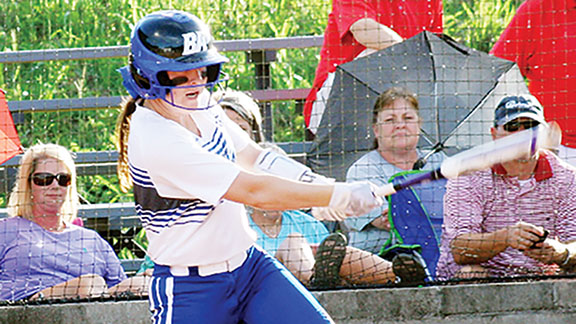 Kailyn Jordan of Brookhaven Academy makes contact on a pitch during their game against Silliman recently. (Photo submitted)

The Brookhaven Academy Lady Cougars softball hit a snag recently by losing their last three games, including a recent loss to Bowling Green by a score of 7-2.

The loss drops the Lady Cougars to 8-9-1 overall on the season with the Brookhaven Academy tournament coming up on Saturday.

The Lady Cougars got into an early hole against Bowling Green and couldn’t overcome the deficit. Bowling Green put three runs in the bottom of the first inning to take the early 3-0 lead.

Brookhaven Academy clawed their way back into the game Thursday in the top of the fourth inning with a two-RBI triple from freshman Madi Smith to cut the deficit to 3-2.

Bowling Green quickly responded in the bottom half of the inning on an RBI single to left field to take the 4-2 lead.

Bowling Green added on three insurance runs in the bottom of the fifth inning on a two-RBI double and an RBI single to give them the 7-2 lead over the Lady Cougars. The Lady Cougars were shut out in the sixth inning as Bowling Green secured the victory.

Errors on defense had a big impact on the game for Brookhaven Academy with three fielding errors on the game.

Along with the big triple in the fourth inning, Smith started the game on the mound for the Lady Panthers. The freshman pitched all five innings, giving up seven runs (four earned) on ten hits, three walks and striking out four batters.

Smith also led the Lady Cougars at the plate, going 2-for-2 with a single, a triple and two RBIs on the night. Senior Kailyn Jordan, junior Jana Case and eighth grader Emily Claire Felder each had a single to round out the hitting total. Jordan and Case each had one run scored.

The Lady Cougars head into their remaining schedule with six district games left and a couple of tournaments to enter the home stretch of the regular season.

Head coach Becky Flowers has been really impressed with the fight and the will of her team thus far.

“I really cannot say enough good things about this team,” Flowers said. “We are competing every game with five eighth-and-ninth graders and we haven’t been blown out in any of our games. Our pitching and defense has been solid, but our hitting has been a little inconsistent.”

The Lady Cougars have received great pitching performances from Smith and Felder all season long and the duo has kept the Lady Cougars in many ballgames.

Flowers said that Jordan, Case, freshman Abeni Fuller and eighth-grader Madison Moak have been consistent at the plate for the team.

Flowers has also been impressed with senior leaders Cameron Watson and Madison Thompson and how the two have led both on and off the field.

Flowers mentioned that freshman Makayla Martin and sophomore Julie Anna Bartram have been great defensive players for the team.

The goal remains the same for Brookhaven Academy with a deep run in the playoffs being the mission. If the team can stay consistent in their approach, Flowers believes the team will reach that goal.

“The biggest thing is that we stay focused and zoned in on our goals and not our limitations,” Flowers said. “If we concentrate on what we do well and stay on track with the process of competing and playing the game, we will be able to extend our season into the playoffs.”

Former Brookhaven and Wesson football stars played in their season openers in week one of the 2017 college football season.... read more