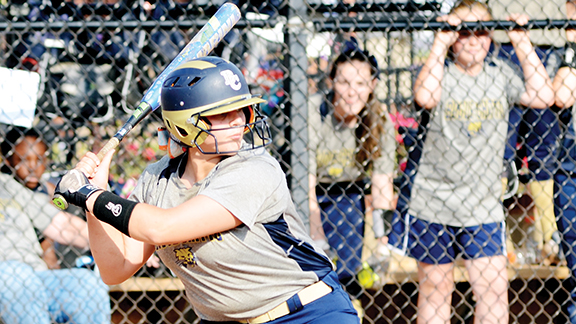 Reagan Kirkland of Bogue Chitto focuses at the batters box waiting for a pitch during a game played recently. (Photo by Dylan Rubino)

The saying goes that Mother Nature is undefeated, and the weather has taken a toll on the 2017 slow pitch softball season in Lincoln County.

For the schools playing slow pitch this fall, rain has made an impact on the season and has shortened the number of games played so far.

The Brookhaven Lady Panthers have played only four games through the first two months in a frustrating season.

The schedule shows the team should have played 10 games so far, but have only played four.

It’s been a weird start, but the players have rallied.

“It’s been very frustrating for me and the girls,” Brookhaven head coach Mandy Vinson said. “Our girls have been responding well through working hard in the cage when we aren’t able to get in the field.”

Through a rain-shortened season, the Lady Panthers own a 1-3 overall record in the first four games.

Between the weather and playing tough competition, it hasn’t been an ideal start.

“We’ve played some really tough competition so far and haven’t been able to get in a good rhythm because of all the rain,” Vinson said. “We play West Lincoln on Thursday and two tough games against Northwest Rankin and Union Saturday at Northwest Rankin.”

Even in limited action, Vinson has been pleased with the response of all her players and mentioned Madi Miller, Kyja Willis, Kat Wallace and Rileigh Allen as players who have stepped up and played exceptionally well.

“Madi Miller and Kyja Willis have really stepped up in the outfield for us,” Vinson said. “Kat Wallace has been solid for us at third base. We moved Rileigh Allen to pitching and she has done a good job for us there and her bat has been great so far.”

With nine games on the schedule through today, the Lady Cats have only played five of those nine games. The team owns a 3-2 overall record through those games and has showed promise and carry-over from the 2017 state championship fast pitch team.

“We haven’t played in a week due to the rain. It’s been frustrating,” Leggett said. “We’re doing OK as of now. We’ll know more in a few weeks.”

In the next couple of weeks, the Lady Cats will face tough competition, including matchups against Perry Central, Warren Central, Franklin County, West Lincoln and Brookhaven.

Players who have stepped up for Bogue Chitto so far this season include Reagan Kirkland, Karly Leake, Baileigh Jackson, Julianna Frazier and Codi Leggett.

Even with the returning players, Leggett has been impressed with one of his new players in Lineka Newson.

“She’s had the hottest bat for us so far,” Leggett said. “She has done a good job of pitching for us, too.”

Those five players have plenty of experience from the slow pitch season and winning the 1A state championship and their performance has carried over into the new school year.

Leggett admitted that the rain has slowed the team down and it has been hard to deal with at times, but it’s nothing new to Leggett and his players.

“The rain has definitely slowed us down, but it’s happened before to us,” Leggett said. “Hopefully we will pick up where we left off.”

The Lady Cats defeated South Pike twice and Franklin County once in their three wins. Bogue Chitto lost to Wesson and Lawrence County this season to move to 3-2.

Bogue Chitto will play their first district game of the season Thursday on the road against Perry Central. First pitch is set for 6 p.m.