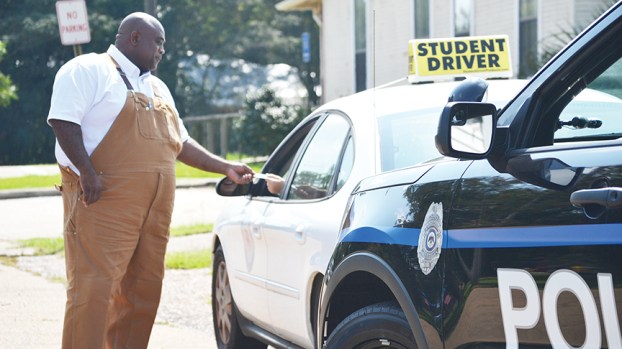 Photo by Donna Campbell/Brookhaven Police Chief Kenneth Collins checks the identification card of a student driver Friday at a traffic stop on East Court Street. The new partnership between the city’s police department and school district aims to provide new drivers hands-on experience with law enforcement when they’re behind the wheel.

Young Brookhaven drivers get lessons on being pulled over

Blue lights in the rearview can strike fear into the heart of even the best driver.

But for a high school student, practicing parallel parking and lane-changing skills, it can be even worse.

Brookhaven Police Chief Kenneth Collins doesn’t believe it should be.

His department and Brookhaven High School’s drivers education program are partnering to provide new drivers hands-on experience with law enforcement when they’re behind the wheel. The goal is to give the students what may be their first encounter with law enforcement, and make it a positive, educational lesson.

Coach Mike Powell is in his second year teaching drivers ed at BHS. He quickly got on board with the chief’s idea to “pull over” student drivers.

Powell is in the passenger seat with student drivers and usually there are two more students in the back seat. The driver knows there will be a traffic stop, but not when.

“As we’re being pulled over, I start walking them through it,” Powell said.

He explains what to do, where to pull over safely and how to indicate to an officer that the command to stop is understood. Then he makes sure they know what information the officer will want to see.

They even cover information like what to do if there’s a gun in the vehicle. That would be to alert the officer verbally when he approaches the car that there is a weapon and where it is, Powell said.

The officer who makes the stop then talks to the students about motorist safety.

“They’ll talk to them about what to expect if you get pulled over,” Powell said.

The student drivers who have been stopped seem appreciative of the opportunity to interact with officers, he said.

“None of them really want to get pulled over,” Powell said. “I think once they experience it, they think this is not that bad of a thing to deal with. I think it really brings down the anxiety.”

Capt. Clint Earls said the experience also allows the young drivers to see how motorists should be treated during traffic stops.