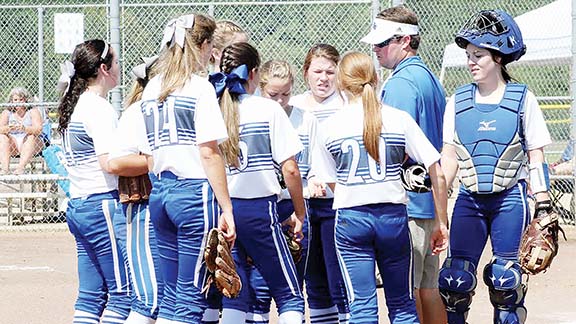 After trailing 5-1 through four innings, the Brookhaven Academy Lady Cougars fought back by posting three runs in the top of fifth inning, but couldn’t overcome the deficit against Clinton Christian and fell Tuesday night 5-4.

The loss drops Brookhaven Academy to 8-10-1 overall on the season.

“We didn’t play to our potential and we lost a big game,” Brookhaven Academy head coach Becky Flowers said. “We have to trust our preparation and see it through as the playoffs start to approach.”

In the end, defensive miscues played a big part in the game for Brookhaven Academy with nine errors on defense on the night. Clinton Christian also had four errors on the field.

Clinton Christian quickly responded and tied the game with an RBI sacrifice fly from Kenzie Lawrence to tie the game 1-1.

With the bases loaded in the bottom of the fourth, Lawrence hit a groundball and reached base on another error by Brookhaven Academy, scoring another run to make it 5-1 Clinton Christian.

Two singles and a walk had the bases loaded for the Lady Cougars in the top of the fifth inning. With two outs, junior Jana Case hit a pop fly and reached bases on an error by the opposing pitcher and three runs scored as a result of the playing. The wild inning got Brookhaven Academy back in the game and trailed 5-4.

The Lady Cougars could not get anyone on base in the top of the sixth as the game ended in a 5-4 victory for Clinton Christian.

Freshman Madi Smith got the start for Brookhaven Academy and pitched all five innings, giving up five runs (one earned) on four hits, one walk and no strikeouts.

Despite putting up four runs on the board, no players recorded an RBI in the game. Jordan, freshman Abeni Fuller and eighth grader Madison Moak ach recorded a single to round out the hitting total.

Hanna Zeitz got the start for Clinton Christian and pitched all six innings, giving up four runs (none earned) on three hits, three walks and nine strikeouts. Despite not recording a hit, Lawrence led Clinton Christian with two RBIs on the night.

Brookhaven Academy has a tough road ahead before the playoffs start, but Flowers is confident in her team to turn things around and finish the regular season strong.

“This group can perform at great levels and has the potential to do big things,” Flowers said. “If we can concentrate on what we do well and stay on track with the process of competing and playing the game, we will be able to extend our season into the playoffs.”