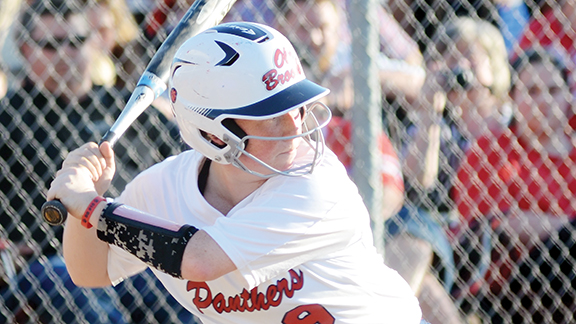 Photo by Dylan Rubino/ Jadeyn Fuller of BHS steps to the plate during a game played recently.

Fighting back from a rain-shortened season, the Brookhaven Lady Panthers played a doubleheader Tuesday night at home against Wingfield.

The Lady Panthers dominated both contests as the team took game one by a score of 21-0 and won game two by a final score of 23-0.

The Brookhaven Lady Panthers move to 3-3 overall on the season with the doubleheader sweep.

Getting both starts for the Lady Panthers, Allen had no problems putting Wingfield away and recorded two shutouts on the night.

In game one of the doubleheader, the lady Panthers got on base with ease as the team walks 12 times.

Leading Brookhaven at the plate was Meg Foster, who had two doubles in game one. Kyla Henderson recorded a single as well.

In game two, the lady Panthers walked eight times. Madi Miller led the Lady Panthers with two singles. Allen, Henderson and Kat Wallace each recorded one double. Jadeyn Fuller and Kyja Willis each had a single to round out the hitting total in game two.

Next up for Brookhaven is a road game at Lincoln County opponent West Lincoln. First pitch is set for 6 p.m.

The Copiah-Lincoln Community College Wolves (1-0) are on the road this week for the second game of the 2017 season... read more