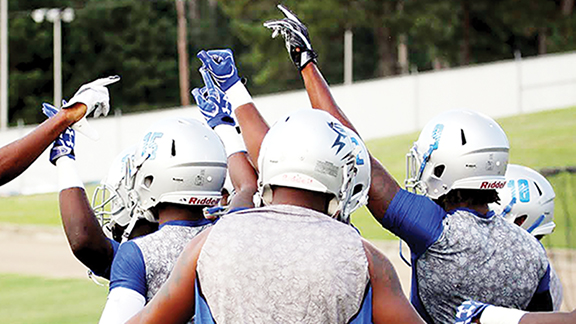 Co-Lin football players break down a huddle during practice this offseason. (Photo from Co-Lin athletics)

The Copiah-Lincoln Community College Wolves (1-0) are on the road this week for the second game of the 2017 season as they travel to Clarksdale for a matchup with the North Division Coahoma Tigers (1-0).

Both teams are coming off wins as Co-Lin defeated Mississippi Delta 31-6 last week, while Coahoma defeated Southwest 35-20. Kickoff is set for tonight at 7 p.m. at James E. Miller Stadium on Coahoma’s campus.

Thursday’s matchup is the 22nd meeting between the programs, in which Co-Lin holds an impressive 19-2 record.

The Wolves showed a lot of promise, especially in the running game, in the week one opener against Mississippi Delta as Co-Lin gained 284 total yards in tough, muddy field conditions. Co-Lin’s pair of freshmen running backs, Deion Dampier and Rico Owens, earned the bulk of that yardage as the duo rushed for 172 yards on 33 carries between them.

Expect the passing game to come to life for the Wolves Thursday night as last week’s game was not a fair representation due to the torrential rains. Co-Lin was 6-for-18 in the air for 87 yards last week between QBs Woody Barrett and Hayden Davis.

The Wolves’ special teams looked as sharp as ever last week as sophomore Griffin Sublett was 1-for-1 on field goals, 4-for-4 on extra points, and averaged nearly 35 yards per punt.

After trailing 5-1 through four innings, the Brookhaven Academy Lady Cougars fought back by posting three runs in the top... read more