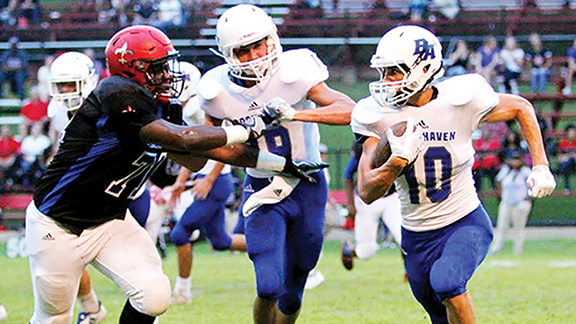 Luke Jackson of BA runs with the football in their win over Trinity Episcopal this season. (File photo)

Encouraged by their two-game winning streak, Brookhaven Academy planned not to end it against the winless Saints.

Sylva Bay put the first score on the board with a touchdown at 3:28 in the first quarter, but failed to follow it with a successful point after. The Saints led the Cougars 6 to nothing.

With only 35 seconds left in the first quarter, BA junior quarterback Dawson Flowers connected a short pass to junior wide receiver Cade Brown, who ran 69 yards for a touchdown. The Cougars’ point after attempt was no good, either, so the teams sat tied at 6-6 going into the second quarter.

Brown scored a perfect fade to the corner from Flowers. Senior wide receiver Tate Felder added the two-point conversion, and BA led 14-7 with 5:33 left before the half.

A Sylva Bay defender picked off a Flowers pass and ran it in for six. The two-point conversion attempt failed, but the Saints had closed the score gap to 14-13 to enter the half trailing by a mere point.

By midway through the third quarter, Sylva Bay Academy had scored another six points, but it did not go unanswered by Brookhaven Academy. On a quarterback keeper, Flowers scored a touchdown. His pass to Felder added the two-point conversion for the Cougars to bump the lead to 22-19.

Sylva Bay completed a pass attempt to add another touchdown to make the score 22-25, after BA’s junior linebacker Cole Griffin intercepted the two-point conversion attempt pass. The Saints were back in the lead.

But Brown hauled in another touchdown catch for the Cougars to bring them up 28-25 just into the fourth quarter. The Saints were successful in blocking the point after attempt.

Coach Ron Rushing’s Cougars were able to hold onto the 3-point lead and run out the last two minutes on the clock to defeat Sylva Bay 28-25, and hold on to their winning streak.

West Lincoln head Coach BJ Smithhart knew his players were going up against a tough team Friday night but they... read more