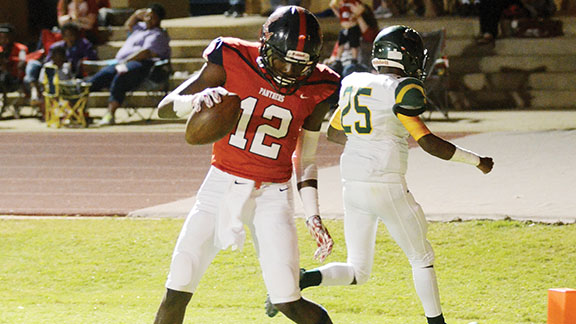 Junior wide receiver John Hilbert of Brookhaven (12) hauls in a touchdown catch near the end of the third quarter in their 55-22 win over McComb Friday night. (Photo by Dylan Rubino)

The Brookhaven Panthers had no problems taking care of the rival McComb Tigers Friday night at King Field, running away with their third straight victory by a score of 55-22.

The Panthers now move to 3-1 on the season heading into their open week.  McComb drops to 0-4 overall on the season with a loss. The Tigers face Amite High School on the road next week.

Ever since their opening loss to Pearl to open up the 2017 football season, the Brookhaven offense has been red hot, scoring 148 points in their last three games.

Thanks to another strong performance by junior quarterback Sevante Quinn and from the ground game, the Panthers cruised in the second half to the easy victory.

After the Panther defense forced a three-and-out to start the game, Quinn found junior wide receiver Dorian German for the 60-yard touchdown pass on the first offensive play for the Panthers. Brookhaven took the early 7-0 lead as a result.

A scary moment happened in the second quarter when junior linebacker Wesley Calcote hauled in an interception and was tackled at the knees and went down in pain. He was helped off the field by the coaching staff and did not return to the game.

After the interception, junior running back Don Blandon took the end-around 19 yards for the score to give Brookhaven the 14-0 lead at the end of the first quarter.

On the first drive of the second quarter, McComb marched down the field 69 yards on 12 plays for the touchdown to cut the Brookhaven lead to 14-6.

With less than two minutes in the first half, senior defensive lineman Dahauntre Hill hauled in his first interception of the season and took it to the McComb three-yard line to set up another Brookhaven touchdown. The interception led to a touchdown run from senior running back Damarrell Leggett.

Brookhaven did not take its foot off the gas in the second half as the team kept fighting and put together numerous scoring drives.

The defense kept on competing as well and fought for Calcote as he watched from the sidelines.

On the first play of the second half, sophomore running back JQ Edwards took it 64 yards to the house and gave Brookhaven a 34-6 lead.

On the next offensive drive, Quinn hit Blandon in the right-corner end zone for Blandon’s second touchdown of the game as the Panthers made it 41-6 over McComb.

Nearing the end of the third quarter, Quinn threw his third touchdown pass of the game to junior John Hilbert in the right-corner end zone to extend the Panther lead to 48-6.

McComb wouldn’t go down without a fight, adding on two late touchdowns in the fourth quarter. The deficit was too much to overcome and the Panthers put together their third straight victory.

Quinn finished the game with three touchdown passes and zero interceptions on the contest to lead the team.