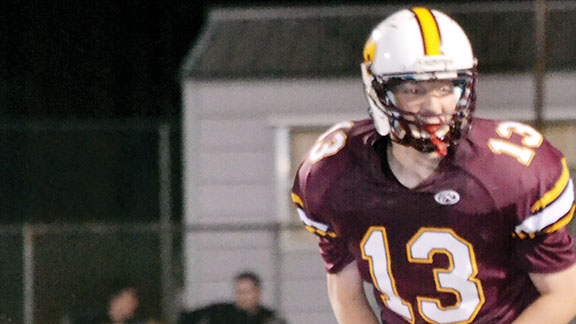 Enterprise blown out by Clarkdale 40-12 at home

The Bulldogs hit hard early, with junior Germarcus Brown scoring a 47-yard rushing touchdown. With a successful point after kick, Clarkdale led 7-0 at just 23 seconds into the game. To add to the hurt, Enterprise fumbled the kickoff return and Clarkdale recovered on the 28 yard line.

The Bulldogs scored on a 3-yard run in and tacked on the PAT to lead 14-0 with plenty of time left in the first.

The Bulldog momentum continued with a 5-yard run and PAT to start the second quarter 21-0.

Enterprise’s senior back Tanner Waldrop returned the kickoff 80 yards, however, for a TD to bring the game a little closer at 21-6.

Sophomore running back Tailor Young scored for the Yellow Jackets again shortly thereafter with a 4-yard rushing TD, though the 2-point conversion attempt was no good. Clarkdale still led 21-12.

With 39 seconds left to go before the half, Clarkdale scored once again on a 13-yard run and tacked on the PAT to go into halftime leading 28-12.

After a scoreless third quarter, Clarkdale scored to start the fourth with a 4-yard run, but a failed two-point conversion. Clarkdale led 34-12.

It was a deficit from which the Yellow Jackets could not recover, as the Bulldogs scored once more on a one-yard run to close out the game 40-12.

The Yellow Jackets hit the road next Friday to face McLaurin. Kickoff between the two schools is set for 7 p.m.

Co-Lin moves to 2-0 with victory over Coahoma

CLARKSDALE, Miss. – Copiah-Lincoln Community College’s offensive was firing on all cylinders Thursday night as the Wolves (2-0) racked up... read more