She graduated from New Hebron High School in 1935. Due to the Great Depression years, she was unable to attend Co-Lin in 1935, but in 1936 she attended Co-Lin as a piano major. During her freshman year, she was a piano contestant in the State Jr. College Platform Events and the pianist for the orchestra. After attending Southern Miss University in 1938, she taught fifth grade and piano at Topeka High School. She also taught fifth grade and piano at Pinola High School.

After World War II, she started working at the Lawrence County Selective Service Office in Monticello as the chief clerk. From January 1947 to 1949, she worked with her husband in a dry cleaning business. From November 1950 until her retirement in March 1977, she served as the county clerk of the USDA Farmers Home Administration County Office in Monticello.

She was an active member of Monticello Baptist Church since 1942, where she served as the organist for 35 years. She was a member of the Fidelis Sunday School class. She was a member of the Lawrence County American Legion Auxiliary, the National Association of Retired Federal Employees, the Magnolia Chapter of Colonial Dames of XVII Century, and former president of the Monticello Women’s Club. She served as a committee member to help coordinate the Co-Lin reunion for the Class of 1938, was voted Co-Lin Alumna of the year for 2005, was the 2008 winner of the Red Rose Award by the Omega Chapter of Delta Gamma for her contributions to education and her community, and was honored on Aug. 29, 1982, by Monticello Baptist Church with a Marguerite Rutledge Day for 30 years of service as church organist/pianist.

She was known for her love and encouragement for her family and people. She was a hope giver who truly cared, and was interested in what was going on in your life. She believed in the power of prayer, and was a faithful servant to her Lord.

She was preceded in death by her husband, Johnie Rutledge, and her parents.

Green, Sarabeth Hall and husband Stuart and Laura Selman and husband Robert; one very special great-granddaughter, Ashlyn Kate Hall; and a host of family and friends.

The family would like to express a special thank you to the staff of St. Luke Hospice for their tender loving care, and to Shelly King and Vella Coleman for their awesome care. In lieu of flowers, donations can be made in Mrs. Rutledge’s name to the Monticello Baptist Church. 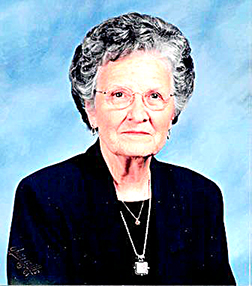