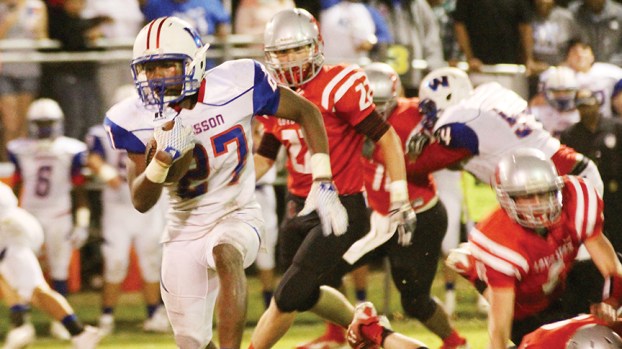 Junior running back JaQuavion Edwards of Wesson (27) runs past Loyd Star defenders in their 34-21 win over the Hornets Friday night. (Photo submitted)

It was standing room only on Friday night at W.E. “Sambo” Smith Field as Loyd Star and Wesson renewed their ancient rivalry. The fans who packed the stands and area around the field got their money’s worth and more as the Wesson Cobras took a hard-fought 34-21 win over the Hornets.

Wesson (3-1) led 19-14 at halftime after initially springing to a 13-0 lead in the first quarter. The Hornets (2-2) came alive with 53 seconds remaining in the first stanza when Desmond Berry returned a Cobra kickoff 75-yards for a touchdown.

The third quarter was something like a brawl with both teams hitting each other with their best shots. Loyd Star took their first lead of the game on a 5-yard Je’Mario Clay touchdown run. The score was the culmination of a 16-play drive that ate up seven minutes of game clock. Cole Carpenter would knock home the PAT kick and Loyd Star led 21-19.

The Cobra offense would respond though on the following drive. Jeremiah Barlow, Dell Thigpen, and JaQuavion Harris ground out the yards as Wesson deliberately moved down the field. Barlow would cap the drive with 11:06 remaining in the game on a 5-yard touchdown run that gave his team a 27-21 advantage.

Loyd Star moved the ball down to the Wesson 25-yard line with 5:42 remaining. Facing 4th-and-2, the Hornets would be hurt by a pre-snap penalty that moved the ball back five yards. On the ensuing play Loyd Star quarterback Dane Smith would be sacked by a Cobra defense that swarmed into the Hornet backfield.

“Hats off to Loyd Star, I thought they played well and they really limited our offensive possessions,” said second-year Cobra head coach Jeremy Loy. “I was really proud of the way our guys responded after they went up, I thought our offensive line came up big on the drive where we regained the lead,” said Loy.