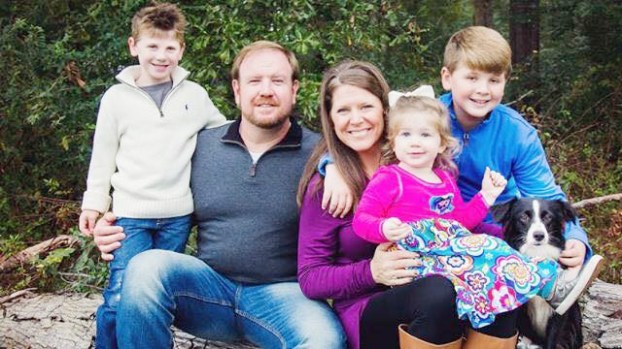 Photo submitted/Pictured are Erin and Brett Smith and their children, Bryce, Hampton and Ashlynn.

Brookhaven School District Board of Trustees candidate is running solo

Without an election, Erin Smith has won her seat on the Brookhaven School District’s Board of Trustees.

Smith, 39, was the lone petitioner for one of two seats on the board that are held by individuals who live in the county, but within the Brookhaven School District.

Smith and her husband, Brett, live in Heucks Retreat.

A special election had been set for Nov. 7, but with only one candidate, the election is unnecessary, Lincoln County Circuit Clerk Dustin Bairfield said.

This will be Smith’s second term on the board.

Smith and Shell are the two at-large members.

She first ran for the office five years ago because she wanted to make a difference in Lincoln County.

“It’s a very humbling experience to feel like you’re giving back to the community,” Smith said. “I feel like this is the best way I can do it right now in this phase of my life.”

The Smiths have three children: Bryce, a sixth-grader at Lipsey Middle School, and Hampton and Ashlynn, who are in the second grade and pre-K3 at Mamie Martin Elementary.

Smith, a Wesson graduate, married Brett, a 1996 graduate of BHS, and they settled in as Ole Brook fans.

When she was first married, she participated in community organizations like Junior Auxiliary of Brookhaven.

“JA was a way to give back on a lot of different levels,” she said. “I always want to have my hands in service. If we don’t, we’re not doing as Christians what we’re called to do.”

Smith and her husband own Particular Poultry to breed and sell chickens to Sanderson Farms. Smith also works full-time with the AARP Foundation as a program manager. She travels the state encouraging consumers to eat more fruits and vegetables.

She is active at Heucks Retreat Baptist Church where she teaches a youth Sunday School class with her husband and sings in the choir.

She’s recently joined the Board of Trustees for the University of Southern Mississippi Alumni Association.

“I try to give back to places that have really given back to me and my family,” she said.

She also volunteers with the Blessings in a Backpack program at First United Methodist Church of Brookhaven whenever she can.

With her work on the school board, she can help adopt policies that can make a difference in children’s lives.

“We want to see us moving upward, growing in academics as well as we can. That’s always the goal,” she said.

A Brookhaven man accused of scheming against a life insurance company could face up to 10 years in prison if... read more