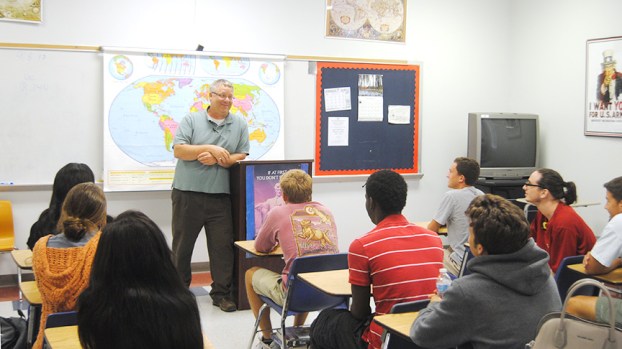 It’s also a day that many younger Americans learned  about Monday.

On that day, 16 years ago, nearly 3,000 people were killed as two planes crashed into the twin towers of the World Trade Center in New York City. A third plane hit the Pentagon in Washington D.C., and the fourth plane crashed in a field in Pennsylvania.

For teachers, it can be difficult to convey to students just how this particular day changed our world as we know it.

“My 11th graders were 6 to 8 months old when this happened,” said Brittany Paschall, U.S. history teacher at Brookhaven High School. “We watch movies on it and I have several people that will cry each year. I’m really just trying to show them how shocking that day was.”

The videos she shows her class go into detail about the missing people at the World Trade Centers.

She said the process of how missing people were identified was hard to watch, but necessary for students to realize just how traumatic of an event it was.

“It talks about how they looked for things such as fingers in the rubble, where they could do DNA tests to identify someone,” Paschall said. “The hard part about teaching this to students, is that many of them are numb to terror attacks these days. You see it all over the news. When I was a kid, this wasn’t normal and it especially didn’t happen in America.”

She said her students are affected by the videos they watch, but those who watched it first-hand in 2001 still feel the effects.

Tenth grade world history teacher Chad Walker tries to inform his students about the religion of Islam. Some Islamist extremists took credit for the attacks.

“I try to talk to them about Islam and their beliefs. It’s a different world and their belief system is totally different. The things they will do to break down democracy, kids need to know what we’re up against,” Walker said.

He also expressed the same feelings as Paschall. He said children will see clips on the news, but they don’t understand the severity of it.

“If you watch some videos, you can see people jumping from buildings, you can hear the bodies hitting the ground,” Walker said. “The amount of lives lost that day is just heartbreaking to this day.”

Walker was teaching at Lipsey Middle School when the attacks occurred.

“During that day, I had some students whose parents were in New York during all of this. None of the teachers could talk about it, because those particular students didn’t have a clue what was going on,” said Walker.

Shortly after the attacks in New York, President Bush addressed many firefighters, police officers and first responders to give them his support.

“I can hear you, the rest of the world hears you, and the people that knocked these buildings down will hear all of us soon,” said President Bush.

To this day, American troops are still fighting the battle.

According to icasualties.org, nearly 7,000 troops have been killed since entering war in 2003.

Osama Bin Laden, the mastermind behind the terrorist attacks on Sept. 11, 2001, was killed by U.S. forces on May 2, 2011 during a raid on his hideout in Pakistan.

After confirmation of Bin Laden’s death, Obama addressed the nation from the White House.

“Justice has been done,” he said.

Crowds gathered outside the White House and in New York City’s Times Square and where the World Trade Centers once were.

In 2003, plans were revealed to rebuild the twin towers. Although there would now be one single tower, it was to be named the Freedom Tower. It has since been renamed to One World Trade Center.

To get into the museum, visitors must walk through a steel and glass pavilion that includes two massive steel tridents, which had been part of the twin towers.

Nick Brumfield spent a week of his summer in the nation’s capital at Cooperative University. It’s an experience that he’ll... read more