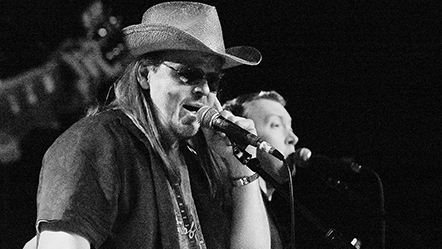 A Monticello musician hopes to fill the pews and a bar for a video shoot this weekend for his single, “Bless Your Heart.”

There’s no pay involved — just pizza and a chance to be in a music video.

“I’m basically asking for a favor from everybody,” he said. “I don’t know what’s going to happen. I do know that it’s going to be fun.”

The video is for Oakes’ first single from the album “West of Capricorn.” The album will be released Nov. 54 on Oakes’ 53rd birthday.

He’s planning for the single and the video to be released in mid-October.

“Bless Your Heart” is southern rock and country tune Oakes penned that tells the story of a man and his ex-wife and the feud between them. It’s got fun, tongue-in-cheek lyrics and several interpretations of the southern phrase, “bless your heart,” he said.

J.B. Lawrence is directing it.

Oakes said it will go straight to youtube, where it will be passed along from fan to fan. His dream is to see it go viral.

“The simple act of just sharing somebody’s video is amazing,” he said. “We’re hoping that people will share it and they’ll like it and enjoy it.”

Oakes’ love for music goes way back. He was in a band in high school and college, then stopped to work a day job. A friend named Jimmy George gave him some sage advice.

“Jimmy always said do what you love or otherwise you’re wasting your time,” he said.

He was teaching art in McComb when George passed away. Two weeks later he wrote the first song he’d written in more than a decade. He got back into music full time.

“Jimmy was a good guy and he was right about that,” he said.

Oakes hopes that the video will prompt folks to listen to his music and buy the album.

Oakes wrote the songs and provides vocals for the album, which he’s recording in Memphis. Billy Earheart of the Amazing Rhythm Aces (“Third Rate Romance”) is playing keyboards and on one song, a grand piano. Earheart played in Hank Williams Jr.’ band for over 20 years.

The video shoot Saturday begins at 9:30 a.m. at Monticello UMC at 130 East Broad St. Dress is Sunday casual with khakis and button shirts or suits for men, dresses or pants for women.

“No crazy, wild patterns,” he said. “Solids are better, but simple patterns will work.”

Filming will take several hours and pizza will be provided for lunch.

Sunday filming will start at 10 a.m. in the parking lot in front of Brookhaven Music & Sound on Railroad Avenue. Filming will also take place in Betty’s Eat Shop from 1:30 to 4 p.m. and at Magnolia Blues from 4:30 to 8:30 p.m. Both restaurants are closed on Sundays but will be open only for the video shoot, he said.

Oakes could have filmed elsewhere, but wanted to showcase the areas that mean a lot to him.

“The Brookhaven people have been so nice to me and my music. Everybody’s been so supportive,” he said. “I’m trying to get familiar faces in it. I think we have two great little towns.”

The Monticello Board of Aldermen approved the city budget earlier this week. Board members met last week to address any... read more