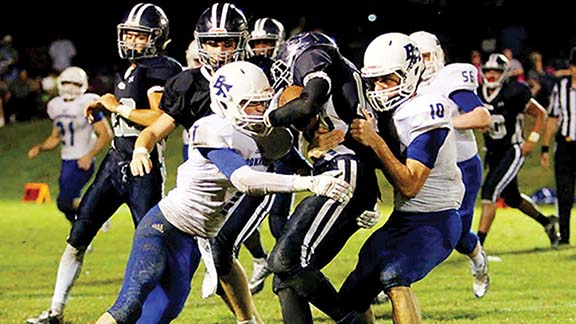 Keegan Smith (7) and Luke Jackson (10) of BA make a gang tackle in their win over Clinton Christian this season. (File photo)

More road games ahead in week five of football

We’re almost at the halfway point in the regular season of high school football in the area and we’ve already seen significant improvements from years past.

In week five of the season, five of the seven area teams playing hit the road once again, while Bogue Chitto and Brookhaven Academy are at home.

Both the Bobcats and the Cougars have been pleasant surprises so far this season with Bogue Chitto at 2-1 and Brookhaven Academy at 3-1 through the first four weeks.

Wesson continues to impress at 3-1 and is coming off a tough road win at Loyd Star.

Loyd Star and West Lincoln have been very competitive through the first four weeks, but suffered setbacks last week with tough losses.

Lawrence County won in overtime to pull even at 2-2 and Enterprise continued to struggle and lost their third straight game last Friday.

The Brookhaven Panthers are off this week before they face their toughest road game of the season at 4-0 North Pike.

Here’s what to look out for in week five.

Is Bogue Chitto ready for a turnaround?

After not winning a game for almost two years, the Bogue Chitto Bobcats have already won two games through the first four weeks of the 2017 season.

Head coach Gareth Sartin knew a turnaround would eventually happen for his team, but having it happen this early has been a relief.

Led by seniors Trey Nettles, Tanner Gunther and Eli Wallace, the leadership is there to help the younger players get better and win more games down the stretch.

The Bobcats face a 0-4 Salem team at home tonight that has already lost to Enterprise, West Lincoln and Loyd Star.

Bogue Chitto has a good chance to move to 3-1 on the season tonight and possibly put together a winning season.

After an opening week loss at home to Cathedral, the Brookhaven Academy Cougars return home tonight to face Ben’s Ford Christian after being on the road for three straight weeks.

With a 3-1 record so far this season, the rebuild for head coach Ron Rushing may be coming sooner than he expected.

The offense has been getting great play from quarterback Dawson Flowers and wide receivers Cade Brown and Tate Felder. The offense can put up points in a hurry and the defense makes plays when it matters most.

The Cougars face a Ben’s Ford team that is 1-3 on the season and enters the game on three game losing streak.

This season could be something special for Brookhaven Academy with how quickly Rushing has changed the culture.

Can the Wesson defense keep it up?

In the last two games for the Wesson Cobras, the defense gave up 14 and 21 points, both games resulting in wins.

Head coach Jeremy Loy made it a point of emphasis this season to be a better team defensively and that has been the case so far.

The combination of senior Dale Thigpen and junior JaQuavion Harris has led Wesson all season long and the duo shows no signs of slowing down.

Both the defense and offense are clicking and that is a good sign for Loy and Wesson.

Which county school bounces back?

Enterprise, Loyd Star and West Lincoln are coming off tough losses in week four and look to fight back tonight.

All three schools are on the road tonight and face tough competition.

Fighting multiple injuries on both sides of the ball, the Yellow Jackets have lost three straight after their exciting opening night win over Salem. The team could not stop Clarkdale on offense last week and the team struggles to put points up on the board.

The Loyd Star ground game could not get it going last week in their loss to Wesson. Senior Patrick Price was held in check and defense struggled down the stretch. That’s not a formula for success.

The Hornets travel to face a 3-1 Stringer team that is undefeated at home.

West Lincoln faced a strong Pelahatchie team on the road and gave up 60 points in a loss.

The Bears showed a lot of fight facing undefeated Pelahatchie, but couldn’t stop quarterback Javeious Purvis through the air and on the ground.