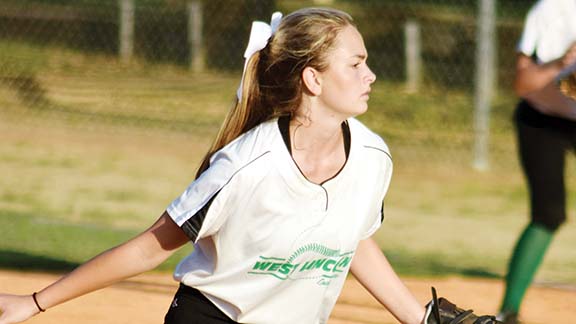 The West Lincoln Lady Bears slow pitch softball team split a pair of games recently with a loss to Perry Central by a score of 6-1 and a win over Brookhaven 4-2.

It’s been a rain-shortened season for West Lincoln and with the weather cooperating, the team has finally gotten their season back on track.

The West Lincoln Lady Bears couldn’t keep up with Perry Central and fell Tuesday by a score of 6-1.

It was a tough loss for head coach Andrew Redd as the team fell in a deep hole early and couldn’t fight their way out of it.

The Lady Bears found themselves in a 4-0 deficit by the fourth inning. Bailee Goodson drove in the only run of the game for West Lincoln in the sixth inning on an RBI sacrifice fly, which scored Micah Powell from third to make it 6-1.

That was the only run of the game as Perry took the 6-1 victory over West Lincoln.

In a Lincoln County matchup between two good softball programs, the Lady Bears topped the Lady Panthers by a score of 4-2 recently at West Lincoln.

The Lady Bears took the early lead in the bottom of the first inning on an RBI single up the middle from Camryn Summerall to give them the 1-0 lead.

With West Lincoln leading Brookhaven 2-0 in the bottom of he fourth inning, Newman laced an RBI single to give the Lady Bears the 3-0 lead.

The Lady Panthers fought back in the game, but couldn’t overcome the deficit as West Lincoln took home the victory 4-2.

West Lincoln was aggressive at the plate in their win with nine hits in the game. Newman and Summerall each had multiple hits for the Lady Bears. Newman, Summerall and Heidi Smith each drove in one run to lead West Lincoln.