Sam Allen’s pen is as sharp as his wit.

With it, the 14-year-old can take a blank piece of paper and craft it into a black and white satirical view of the world. He creates cartoons to illustrate his thoughts on hot topics such as President Trump’s immigration law, the country’s staggering debt and the evils of mainstream media.

The Brookhaven High School freshman demonstrates a mature understanding of current events and can put his ideas on paper with just the right amount of sarcasm.

His political slant is real fast and hard, said his father, attorney Will Allen.

Sam looks at cartoonist Marshall Ramsey for inspiration to understand relevance, timeliness and balance. He’s learned not to use his pen as a sword, cutting political figures to shreds.

He wants to be a cartoonist. But that wasn’t always the case.

Sam had his life planned out. He would go to Samford University in Birmingham like his dad, and then law school.

“In the last three months, he said, I might be a cartoonist,’” Allen said.

So his dad challenged him. “If you’re going to be a cartoonist, why not start now? Let’s see what you can do,” he said.

His family, which also includes mom Jenny and younger sister Lucy, are huge supporters of his art.

“I’ve got stacks of things,” Allen said. “He’s always been that guy.”

Allen is amazed at his son’s abilities.

“His grandmother is an artist, but it skipped a generation,” he said.

Sam has taken a few art classes as electives in junior high and he studied at Ava Jane’s Art Barn several years ago. He’ll be taking a more advanced art class in high school second semester. His parents have loaded him down with art books and how-to manuals.

“They might not have gotten the most usage in the world,” Sam said, laughing.

Allen recalled a conversation he had recently with nationally-known sculptor and artist Kim Sessums, a doctor in Brookhaven and a close friend.

That caused Allen to step back and let Sam do his own thing.

“I quit sending him videos and he’s just gotten better and better and he does what he wants,” he said.

Lately, what he wants is to recreate video game characters with his own spin.

He likes to draw Sonic the Hedgehog, Mario and Smash Bros.

“I will take the trademarked characters and draw my own games for them,” he said. “I don’t have the ability or the knowledge to make my own video games so I try and do the next best thing.”

Allen, a third generation attorney at the law firm of Allen, Allen, Breland and Allen in Brookhaven, would love to see his son join the practice someday. But he doesn’t think Sam’s creativity would mesh well with the duties or the work schedule of a lawyer.

“Sam could easily do that. He’s super smart and he has the ability. But it’s a hard way to make a living. It’s 12, 14 hour days all the time,” Allen said. “I just encourage him to do what he really likes.”

Allen figures Sam will figure out his path when it’s time.

“He used to tell us, ‘I’m going to be a pro-basketball player, a librarian or an artist,’” Allen said. “Those are the three things he loved.”

“Or drama and rock,” Sam added. 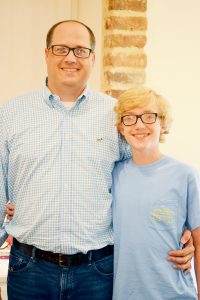 Photo by Donna Campbell/Fourteen-year-old cartoonist Sam Allen, of Brookhaven, and his father, attorney Will Allen.

Census puts state near the bottom

Mississippi found itself on the bottom of the barrel again this week as the Magnolia State came in nearly last... read more