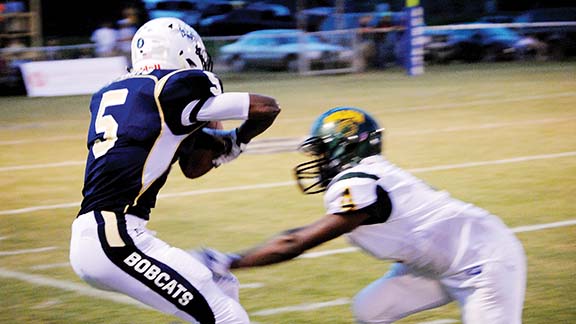 Sophomore wide receiver Zach Upkins of Bogue Chitto (5) makes the catch on the sidelines during their 39-6 win over Salem Friday night. (Photo by Matt Rushing)

Friday night the Bogue Chitto Bobcats (2-1) hosted the Salem Wildcats (0-4) determined to tame their opponent and keep them winless on the season.

The Bobcats scored early on a four-yard touchdown run by senior Trey Nettles. The point after attempt was no good, but Bogue Chitto was on the board 6-0.

Wide receiver Brandon Lewis took another 4-yard run in a few minutes later to up the Bobcats tally. The two-point conversion was good, and Bogue Chitto was ahead 14-0.

With 45 seconds left in the first quarter, BC’s sophomore quarterback Shaw King ran in a keeper to add another six. A two-point conversion attempt was no good. Bogue Chitto led 20-0.

Not long into the second quarter, Nettles at quarterback completed to Lewis for a 15-yard touchdown. Another two-point attempt failed. The Bobcats were up 26-0.

With 38 seconds left to go in the half, King’s pass connected to sophomore wide receiver Zach Upkins for another 15-yard touchdown. The point after attempt was good and Bogue Chitto widened the gap seven more points.

Upkins shut down a Salem scoring attempt by intercepting a pass, and the Bobcats went into the half up 33 to nothing.

Salem’s Wildcats entered the second half hoping to regain some scoring ground and got on the board just a few minutes in. Running back Daquarius Bridges scored on a two-yard run. The two-point conversion attempt did not succeed, however, and Salem was finally on the scoreboard with six.

Salem looked ready to cause more damage when running back Xavion Bridges intercepted a Nettles pass on a third-and-long. But the Wildcats couldn’t get into the end zone again.

Just before the end of the third, Bogue Chitto junior running back Lafredrick Dillon scores on a 22-yard touchdown run. The point after kick was no good. The Bobcats entered the fourth 39-6 and no one saw time in the end zone for the remainder of the game.

Head Coach Garreth Sartin’s Bobcats, now 3-1, will be on the road again next week to Biloxi, facing the 2-and-2 St. Patrick Fighting Irish.