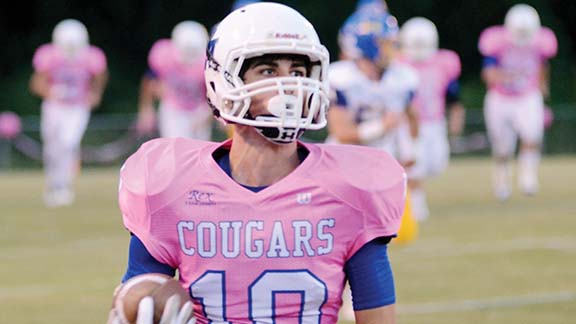 Luke Jackson of Brookhaven Academy races down the sidelines on the long touchdown reception from Dawson Flowers on the first play of scrimmage Friday night against Ben’s Ford Christian. (Photo by Dylan Rubino)

In Brookhaven Academy’s first-ever pink game, the Cougars played with heavy hearts yet still throttled Ben’s Ford Christian by a final score of 48-19.

With the victory, the Cougars move to 4-1 on the season and now ride a four-game winning streak after dropping the opening game against Cathedral in Natchez. Ben’s Ford drops to 1-4 on the season with a loss.

Brookhaven Academy wore pink jerseys to honor those affected by cancer. Each player wore a name on the back of their jersey in honor of someone they know who either lost their lives to cancer or keep fighting the dreaded disease.

Playing with fight and determination to honor those close to them, the Cougars sparked on offense early and routed the Eagles to pick up their fourth win.

On the first play of scrimmage for Brookhaven Academy, junior quarterback Dawson Flowers found senior Luke Jackson for the 60-yard touchdown pass to put them up 7-0 early.

After a muffed punt by the Cougars, Ben’s Ford punched it in for the short touchdown run to tie the game 7-7.

On the next offensive possession, Flowers connected with junior wide receiver Cade Brown on a screen pass and Brown took it 40 yards for the score. That put the Cougars up 13-7.

Next offensive possession for the Cougars, Flowers was intercepted and the Eagles took it for the pick-six. Ben’s Ford tied the game 13-13.

Senior Logan Murray punched it into the end zone from one yard away to give Brookhaven Academy the 19-13 lead before the end of the first quarter.

The Flowers to Brown connection happened once again as the two hooked on another long screen touchdown pass to put the Cougars up 26-13.

The Eagles added on a touchdown to send the game to halftime with Brookhaven Academy up 26-19 going into the locker room.

The Cougars did not let their guard down coming out of halftime and came out firing in the second half and kept up the offensive pressure.

A three-minute touchdown drive to open up the second half put the Cougars up 32-19.

After some miscues on defense in the first half, Brookhaven Academy tightened up and shut out the Eagles in the second half.

Brookhaven Academy added on a touchdown and a field goal to end the game with a 48-19 victory.

After not winning a game for almost two years, head coach Ron Rushing has built a winning program and now owns a four-game winning streak.

Playing with an injured throwing hand, Flowers continued to lead the Cougar offense and kept drives going with his arm and his legs.

Brown led the offense with three touchdown receptions on the night.

The defense gets the game ball after posting a shutout in the second half to put the game away for Brookhaven Academy.