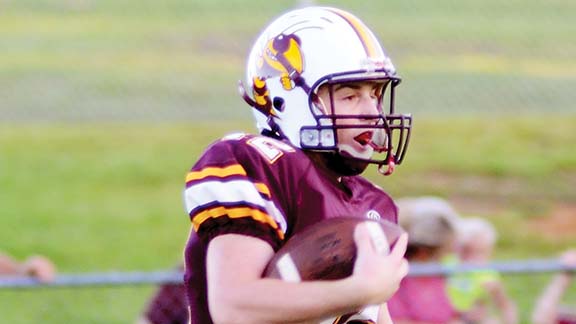 Tanner Waldrop of Enterprise runs with the football in a game played earlier this season. (File photo)

When the Enterprise Yellow Jackets faced the McLaurin Tigers Friday night on the Tigers’ home turf, they were hoping for a closer game than a one-score finish against the 40 put up by McLaurin.

McLaurin came out powerfully in the first with 14 unanswered points and succeeded in a virtual repeat of the first to enter the half 28-0.

Yellow Jackets sophomore tight end John Burns taken to the hospital by ambulance after passing out at halftime.

A field goal attempt from the Tigers later in the quarter also fell short.

The fourth quarter passed almost scoreless, until Yellow Jackets senior fullback Danny Thomas was able to carry the ball into the end zone as the clock rolled to 0:01. The two-point conversion was no good, and Enterprise ended the game with one score on the board, falling 6 to 40.

Enterprise’s top tackler for the night was outside linebacker Jordan Stephens with 11 tackles. Rushing leader was also Stephens with 91 yards. Thomas was second with 73 yards.

Enterprise, now 1-4, will travel this time to face the 2-3 Mize Bulldogs. Mize is coming off a 20-7 win over Saint Andrew’s Episcopal in Ridgeland and plays Wesson and Enterprise the following two weeks.

More road games ahead in week five of football

We’re almost at the halfway point in the regular season of high school football in the area and we’ve already... read more