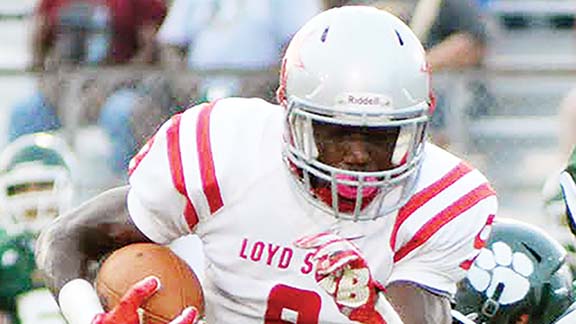 The Stringer Red Devils (4-1) and their junior running back Anthony Thomas would prove to be too much for Loyd Star (2-3) on Friday night in Jasper County as the Hornets suffered a 56-34 defeat. Thomas ran for 165 yards and three touchdowns in the first half to send Stringer to a commanding 35-14 halftime advantage.

Thomas got his team jump-started on their first drive as he raced past the Hornet defense for a 74-yard scoring run. Stringer built their lead to 14-0 before Loyd Star responded. Loyd Star running back Je’Mario Clay capped a successful Hornet drive that covered 77-yards with a 1-yard touchdown plunge to make the game 14-7 with three minutes remaining in the first quarter.

The Hornets would score again with seven minutes remaining in the first half when Quan Berry cut the Stringer lead to 21-14 with his fifth rushing TD of the season. Berry and Patrick Price would add a rushing TD apiece in the second half.

Stringer, who’s only loss this season was to defending 2A South State champions Bay Springs, would put the game away with four unanswered touchdowns in the 2nd and 3rd quarters. On the final play of the game Loyd Star QB Cullen Keene hit Steven Mills for a 14-yard TD pass. It was the first score through the air for the Hornets this season.

“Our thing all year has been effort and we’ve given it every game,” said Loyd Star head coach Brian Ford, “Tonight though we took it instead of giving it,” said Ford.

Loyd Star returns home next Friday night as they host the Pisgah Dragons for a 7 p.m. kickoff at W.E. “Sambo” Smith Field.

West Lincoln blown out by Pisgah on the road 70-34

There were a few bright spots for the West Lincoln Bears during Friday night’s game against the Pisgah Dragons, but... read more