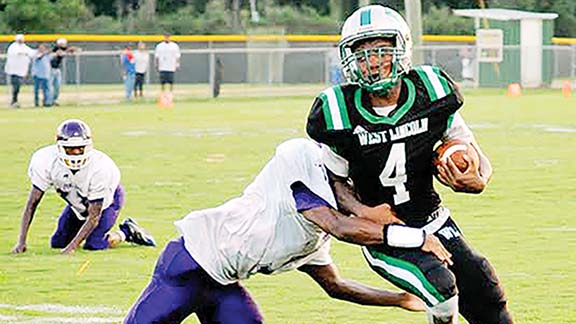 Le’darrius Jones of West Lincoln breaks off a tackle in a game played earlier this season. (Photo submitted)

West Lincoln blown out by Pisgah on the road 70-34

There were a few bright spots for the West Lincoln Bears during Friday night’s game against the Pisgah Dragons, but dreams of a win in Sandhill quickly went up in smoke.

“They got us,” Bears head coach B.J. Smithhart said. “We’ll just keep working, keep going. That’s all you can do is get up and do it again.”

Bears’ senior Chase Owen put West Lincoln on the board first with 1-yard rushing TD, with Gabe Nations adding to the score with a 2-point conversion.

But then Pisgah hit them with 40-yard, 22-yard and a 4-yard touchdowns and made good on the extra point attempts to put them 8-21 at the end of the first quarter.

The Dragons dominated in the second quarter with 35-yard TD with a PAT followed by a 52-yard TD a few minutes later to bring it to 14-34, followed by a 40-yard drive and a PAT for eight more points.

With less than a minute to go in the second, Owen threw a 20-yard pass, getting them on the board again, 20-42. The celebration was short lived, however, as the Dragons hit them again with a 49-yard rushing TD to take them into the half 20-49.

In the third quarter, senior Brandon Smith  got a TD for the Bears then rushed for a 2-point conversion, but Pisgah countered with a 8-yard rushing touchdown and a PAT to bring it to 28-56.

With under a minute left in the third, the Dragons scored another touchdown and a PAT, ending the quarter 28-63.

In the fourth, Owen passed Nations to go 34-63, but the Bears failed at the 2-point conversion. Another TD and a PAT by Pisgah ended the game 34-70.

Smithhart said he’s proud of his team, despite the loss.

“We’ve got some good kids. We’ll get better,” he said.

West Lincoln is home next week against the Stringer Red Devils, a team that’s 4-1 after beating Loyd Star Hornets Friday night. Kickoff is at 7 p.m.

When the Enterprise Yellow Jackets faced the McLaurin Tigers Friday night on the Tigers’ home turf, they were hoping for... read more