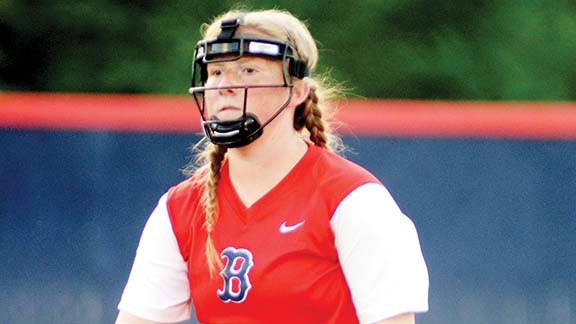 Jadeyn Fuller of Brookhaven fires a pitch in their win over Wesson Monday night. (Photo by Dylan Rubino)

In a battle between two local slow pitch softball teams, it was the Lady Panthers that came out on top at home against the Wesson Lady Cobras by a final score of 11-10.

The Lady Panthers jumped on the board quickly to start the game and held an 8-3 lead going into the seventh inning. Everything looked good for the Lady Panthers, but the Wesson Lady Cobras fought back and tied the game up. After a home run and a couple of singles, Wesson tied the game at 8-8 and the game went to extra innings.

In the ninth inning, the Lady Panthers walked it off with a two-run homer by Meg Foster to give Brookhaven the 11-10 victory.

“I am so proud of the way our girls swung the bat today,” Brookhaven head coach Mandy Vinson said. “They kept fighting the entire game.”

Kyla Henderson and Meg Foster both had monster games for the Brookhaven Lady Panthers. Henderson had three singles and a home run while Foster followed up two singles and two home runs on the night to lead a dominant offensive performance.

Kat Wallace had three singles, Sharquita Cook had a double and one single, Madi Miller and Rileigh Allen each had two singles and Jadeyn Fuller had one single to round out the hitting total.

The Lady Panthers have a quick turnaround as they face Bogue Chitto tonight at home. First pitch is set for 5 p.m.