What we learned from week five of football 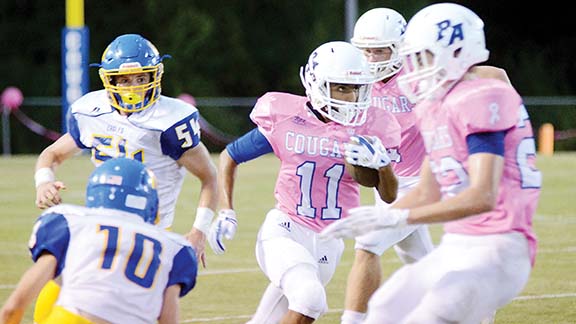 Sonny Singh of BA (11) runs between the tackles in their win over Ben’s Ford Friday night. (Photo by Dylan Rubino)

Week five is officially in the books for the 2017 high school football season in the state of Mississippi and we learned a lot about the local teams playing over the weekend.

Before this football season started, Brookhaven Academy and Bogue Chitto hadn’t won a football game in two years. Both schools have had surprising turnarounds this season with the Cougars standing at 4-1 and the Bobcats at 3-1 so far on the gridiron. With favorable schedules, both Brookhaven Academy and Bogue Chitto could put together winning seasons.

Lawrence County pulled out its second consecutive overtime victory with a win on the road at Franklin County in double overtime.

The Wesson ground attack continues to dominate, giving opposing defenses problems and that showed in its win over Richland Friday night.

Here are the major takeaways from week five of the high school football season.

BA offense gets better and better

Even with an injured throwing hand for junior quarterback Dawson Flowers, the Brookhaven Academy offense lit up the scoreboard with a 48-19 win over Ben’s Ford Christian.

Flowers had a big game through the air, going 15-for-21 with 304 yards, four touchdowns and two interceptions. Flowers connected with junior wide receiver Cade Brown and senior Luke Jackson throughout the game. Brown reeled in five catches for 126 yards and three touchdowns. Jackson had five catches for 151 yards and one touchdown.

Senior running back Logan Murray also rushed for 130 yards on 20 carries with two touchdowns on the game.

The offense has seen significant improvement on a week-to-week basis and that bodes well for Brookhaven Academy.

For the second week in a row, the Bogue Chitto Bobcats held their opponent to under 10 points in the game, defeating Salem Friday night by a score of 39-6.

The Bogue Chitto defense forced four turnovers on the night, including three fumble recoveries and one interception by sophomore Zach Upkins.

Junior Darius Porter had another strong defensive game as he led the team with 11 total tackles. Senior Trey Nettles and junior Demarcus Godbolt each had nine tackles. Senior Tanner Gunther and juniors Lafredrick Dillon and Brandon Lewis each had eight tackles on the night.

The offense rushed for 220 yards and four touchdowns for the game, which seems to be their bread and butter.

The competition gets stiffer this week when Bogue Chitto travels to 2A opponent St. Patrick in Biloxi Friday night.

After starting off the season 0-2, the Lawrence County Cougars have reeled off three wins in a row, which were all on the road. The last two victories have come in overtime.

The Cougars held Franklin County to a field goal to start off double overtime and scored a touchdown on their possession to win the ballgame.

Lawrence County struggled against two 5A programs in Brookhaven and North Pike to start the season, but bounced back and clawed out tough victories.

The defense has stepped up in the key moments of the game and made the stop when it matters most.

Lawrence County returns home Friday night to face a 3-2 Collins team, who enters the contest on a three-game winning streak.

The Wesson ground attack continues to be the most impressive unit in the area.

The Cobras rushed for an impressive 510 yards on the ground, en route to a dominating 47-13 victory at Richland.

Leading the way for the Cobras was senior Dale Thigpen, who rushed for 216 yards on 19 carries and two touchdowns. Junior JaQuavion Harris also had a big game with 12 carries for 152 yards and two touchdowns. Senior Jeremiah Barlow added on 68 yards rushing and two rushing touchdowns as well.

The 510 yards and seven touchdowns on the night gave Wesson the easy victory and moved them to 4-1 overall.

Defensively, the Cobras have looked much improved from last season, only allowing 95 points on the season and scoring 189 points so far in five games.

Wesson returns home Friday for its homecoming game against Mize.