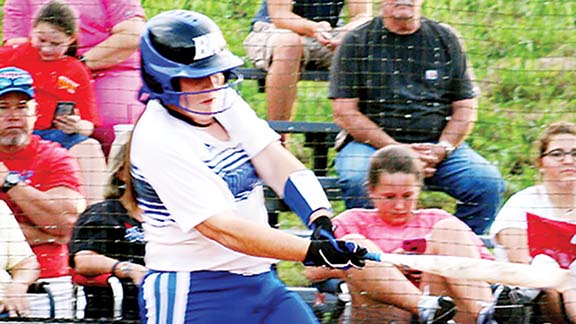 Senior Cameron Watson of Brookhaven Academy swings at a pitch in a game played this season. (Photo submitted)

On senior night, the Lady Cougars honored their three seniors before the game as they hosted Bowling Green Tuesday.

It took the Lady Cougars seven innings, but they hung on late to take down Bowling Green by a final score of 3-2.

Bowling Green tied the game up at 2-2 in the top of the third on an RBI single. Bowling Green threatened to score more in the third by loading the bases, but the Lady Cougar defense got out of the inning.

Both defenses kept the game tied the rest of the way. Still tied at 2-2, the game went to the seventh inning. Pitcher Madi Smith of Brookhaven Academy got the outs in the seventh by forcing ground balls and letting her defense make the plays to end the seventh.

Errors hurt Bowling Green in the bottom of the seventh, as back-to-back errors put runners on second and third. Madison Moak was the hero for the Lady Cougars, as her single brought in the winning score, giving the Lady Cougars the 3-2 victory in their final regular season game.

Coming off a big district win over West Lincoln Monday, Bogue Chitto  got the upper hand over the Lady Panthers... read more