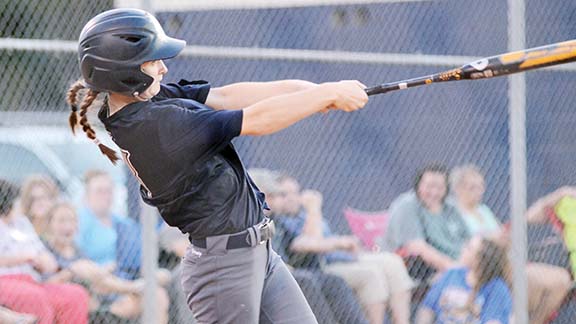 Karly Leake of Bogue Chitto knocks an RBI triple to left-center field in their 11-6 win over Brookhaven Tuesday night. (Photo by Dylan Rubino)

Coming off a big district win over West Lincoln Monday, Bogue Chitto  got the upper hand over the Lady Panthers of Brookhaven Tuesday night.

Bogue Chitto jumped out to an early lead and never looked back, taking home the 11-6 victory.

“The girls played well tonight. I thought it was a very good win for us,” Bogue Chitto head coach Scott Leggett said. “Brookhaven always has a good team and we always have great games between the two of us. This game was important for us.”

The Lady Cats got a big boost Tuesday with the return of sophomore Codi Leggett, who was recovering from a knee injury and played her first game of the slow pitch season Tuesday. Leggett had four singles and one RBI on the game.

Bogue Chitto had 21 hits on the night compared to eight for Brookhaven.

The Lady Cats got on the board first with two runs in the top of the first to make it 2-0 Bogue Chitto.

Junior Karly Leake and senior Reagan Kirkland each had an RBI single in the top of the second inning to increase the Lady Cats’ lead to 4-0.

A two-run double and two RBI singles in the top of the fourth plated four more runs for Bogue Chitto to hold an 8-0 lead after four innings.

The Brookhaven Lady Panthers wouldn’t go down without a fight and battled  back on multiple occasions.

In the bottom of the fifth inning, Meg Foster blasted a two-run homer to put Brookhaven on the board and cut the deficit to 8-2.

Freshman Kayci Beth Wallace of Bogue Chitto hit an RBI single in the top of the sixth to increase the lead to 9-2.

The Lady Panthers made a big push in the bottom of the sixth inning. A two–run double from sophomore Madi Miller got the Lady Panthers closer at 9-4. Senior Rileigh Allen came up huge for Brookhaven and sent a two-run home run over right-center field to cut the deficit to 9-6.

Even after a great rally, the Lady Panthers could not catch up to Bogue Chitto in the end.

Stevie Montgomery got the win on the mound for Bogue Chitto. Allen got the loss for Brookhaven.

Both Bogue Chitto and Brookhaven both have relatively young and new player son the team, but they are making big impacts in the slow pitch season.

“Both teams have a lot of new girls coming in and stepping up for both teams,” Leggett said. “We swung the bats well and we played good defense tonight. We still have things to improve on going down the stretch, but we’re getting better every day.”

Next up for Brookhaven is a road game at Lawrence County Thursday night. First pitch is set for 6 p.m. Bogue Chitto is off until Saturday when they will participate in the Ole Brook tournament.