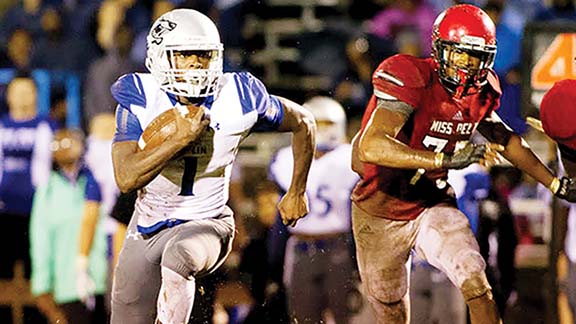 Nero Nelson of Co-Lin runs past an opposing defender in a game played earlier this season. (Photo credit: jucoweekly.org)

Co-Lin looks to bounce back vs. Jones

The No. 20 Wolves of Copiah-Lincoln Community College (2-1) are in search of their first South Division win as the team travels to Ellisville to take on the JCJC Bobcats this Thursday at 7 p.m.

The Wolves did not seem in rhythm last week, but had several players with solid performances. Woody Barrett, a freshman QB from Orlando, Florida, was 12-for-23 in the air for 161 yards. The freshman also led the Wolves with 16 rushing attempts and two scores on the ground. Freshmen Rico Owens and Deion Dampier got the rest of Co-Lin’s touches for 49 and 38 yards respectively.

Sophomore Ryan Drew led the Wolves in receiving yards with one reception for 45 yards. Jemarcus Weatherall racked up 40 yards on two receptions, while Kobe Gates posted 29 yards on three catches.

Defensively, Tri-County Academy graduate Swayze Bozeman led the Wolves. The freshman had eight tackles (seven solo) and two tackles for loss. Tyler Glass had another standout game has he wrapped up five tackles and returned an interception for 62 yards. Sophomore Barry Howard, a defensive lineman, had four tackles, two sacks, and a forced fumble.

On the season, the Wolves lead the MACJC by only allowing 33 points. The Wolves also lead the league in sacks, with 19, interceptions, with six, and in yards allowed, with 232.7 per game.

Special teams has been very sharp all season as Griffin Sublett is 3-for-4 on field goals and 10-for-10 on extra points. The sophomore is also averaging nearly 37 yards per punt.