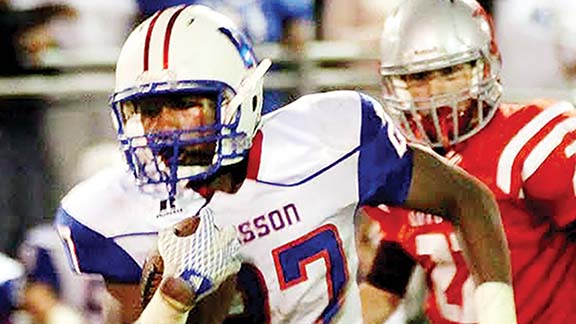 JaQuavion Harris of Wesson (27) races for the end zone in a game played this season. (File photo)

3 teams defend for homecoming in week 6

At the halfway point of the high school football season, seven of the eight area teams will battle on the gridiron Friday night. This is also the first week of district play for 5A schools.

Bogue Chitto and Brookhaven hit the road to meet opponents and the others will host their games with home field advantage. Enterprise has a bye week.

The Bobcats of Bogue Chitto carry their 3-1 record on the road to the Coast to face the St. Patrick Fighting Irish. The Irish, at 2-2, have had a close win and a blowout victory, but both losses were by a single touchdown.

The Bobcats have varied quite a bit. Their one loss was a humbling defeat to Wesson of 41 points. Their wins have ranged from a two-point spread up to 33 points. The Irish may have enough fight in them to make Coach Garreth Sartin’s Bobcats scramble to pull out a win.

Brookhaven Academy hopes to keep its winning streak alive with a homecoming night victory over Claiborne Academy. The Rebels from northwestern Louisiana have a 3-1 record — and their only loss of the season was their opener. With a single one-point exception, they’ve won by an average of nine points each game so far.

The Cougars also suffered their only loss of the year in the opener and stand at 4-1 with an average win of 15 points. Coach Ron Rushing wants to keep the winning streak alive, and based on the last few games there is a good chance his team will do just that.

The BHS Panthers are on the road for the only district game of the week, facing the undefeated Jaguars of North Pike. The Panthers (3-1) and Jaguars (4-0) each want to be the first team to chalk up a W in district play.

Coach Tommy Clopton’s team is looking to keep their three-game winning streak going and shut down North Pike’s. The Jaguars have won each of their games by an average of 14 points. The Panthers’ point spread average is 30. Brookhaven may have the advantage, but one thing is for certain — one team’s winning streak is coming to an end and the other will carry theirs on for another week.

The Loyd Star Hornets have gotten stung more this season than they have stung others. Though they lost by two or three touchdowns in each of their three season losses, their victories were also decisive, winning by three and four touchdowns to make their season 2-3 so far.

The Dragons of Pisgah will face the Hornets coming off their blowout of West Lincoln last week into a 3-2 record. The Dragons’ other four games averaged close to 20-point losses and 20-point victories, two of each. Coach Brian Ford’s red and black will have the home advantage against Pisgah.

The Lawrence County Cougars enter their homecoming game Friday night with a 3-2 record. The Collins Tigers bring their 3-2 record to meet them. The Tigers’ losses have been very close — just by two or three points — and their 23-, 38- and 29-point victories have given them a winning streak that brings them to Monticello motivated to keep it moving.

Coach Jaymie Palmer’s Cougars have lost by 18 and 27 points — their larger loss to Brookhaven — but have a three-game winning streak. They won by 10 points in the first W of the season, but the last two games have been won in overtime (and double OT) by a mere three points. The Cougars are going to have to fight and bite hard against the other cats to put up a homecoming win.

Coach Jeremy Loy’s Cobras will host the Mize Bulldogs on home territory in Wesson. With one loss by two touchdowns in their 4-1 record, the Cobras want to keep their winning streak of three going for this homecoming matchup. Wesson has won each game by a huge margin, with the biggest spread against Bogue Chitto in a 55-14 win in week three.

The Bulldogs bring a 2-3 record into the fight and have won each victory by a similar margin as their losses — about 15 points. The Cobras have a good chance of keeping their record intact and adding another win in this face-off.

The Bears of West Lincoln (2-3) host the 4-1 Stringer Red Devils. The Bears are not in a streak they’d like to continue, coming out of two devastating losses of roughly 35 points each.

The Red Devils, on the other hand, have put up strong wins in each of their last four matchups, winning by as much as 38 points, including strong hits against Enterprise in week three and Loyd Star last week. Coach BJ Smithhart hopes his West Lincoln team can reverse both trends and stop Stringer from putting another notch in its belt this season.

All games are scheduled to begin at 7 p.m