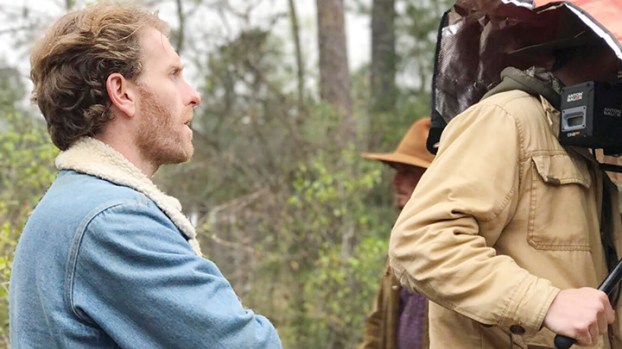 A Brookhaven filmmaker will premiere “Blood Country” to local audiences during the Lawrence County Film Festival, which will be Oct. 6-7.

Travis Mills’ movie was filmed in Lawrence and Lincoln County and co-stars Marlene Cupit of Brookhaven. It’s Mills’s retelling of a short story by Robert E. Jones — known as Bobby Jones to old-timers in Brookhaven — which details true events that happened in and around Lawrence County in 1884.Based on Jones’s “The Outlaw, the Sheriff and the Governor,” the film is about a man accused of killing his brother and the honorable sheriff who has to bring him to justice. It’s produced by Mills and Running Wild Films.

The premiere of “Blood Country” in Monticello is sold out but tickets are still available for the Brookhaven showing Oct. 21, Mills said.The weekend in Monticello will begin with a free showing of the film “Jesse James’ Women” at 7 p.m. Oct. 6 at the Lawrence County Civic Center. The 1954 film was shot in Silver Creek.

A “Blood Country” premiere party will be held Oct. 7 from 3-6 p.m. at the historical home of A.H. Longino, located at 136 Caswell St. in Monticello. Longino is a character in the movie.

At 3:30 p.m., Sen. Sally Doty, R-Brookhaven, will present a book signed by A.H. Longino to be placed in the house. Visitors can tour the Longino House and the newly-renovated Barron Cottage on the grounds. Carriage tours of real locations related to the film will be available, and actors from “Blood Country” will be available for a meet-and-greet at the party.

There will also be pumpkin decorating and storytelling for children. Tea with the Daughters of the American Revolution and musical entertainment will add to the excitement.

Local arts and crafts, homemade jams, jellies and pickles, fresh ground cornmeal and local honey and molasses will be available for purchase. Chicken and dumpling with dressing plates, snowballs, cotton candy, and treats from the Sweet Shoppe will also be sold. The Brookhaven showing will be Oct. 21 at The Haven. Select members of the cast and crew will be in attendance to introduce and talk about the film. Tickets are $10 in advance and $15 at the door. Tickets are available at eventbright.com.

This is Marlene Cupit’s second film for Running Wild. The Brookhaven businesswoman, who founded Hurst Review Services, played a lead role in “Porches and Private Eyes.”

“Marlene plays a very different woman than she did in ‘Porches and Private Eyes,’” Mills said. “Her character’s name is Matt, based on the real life wife of Sheriff Dan Lee. She’s a tough lady, a steadfast wife.”

“I was really excited to work with Marlene to create something totally different than we had before and her performance is proof of her versatility as an actress,” he said. “Audiences in Brookhaven will see her crack the whip in this one, literally, along with other great moments. I love working with her.”

Mills, the grandson of longtime Lincoln County Judge Donald Patterson, said he never met Bobby Jones, who has been described to the filmmaker as a local legend.

“People around here speak to his wit, his humor,” he said. “My grandfather knew him very well and was the one who introduced me to his book, ‘Mississippi Gumbo.’ It’s a fascinating read and I’m very glad that Jennifer Wright, his daughter, is getting the book back in print.”

The Brookhaven screening for “Blood Country” starts at 7 p.m.

Also that day, Running Wild Films will be screening a kung fu comedy at 1 p.m. and a documentary at 5 p.m.

Tickets for “The Curse of the Dragon Sword” are $5 for age 16 and older. Children 15 and younger are free.

This Kung Fu adventure follows a father and daughter duo as they seek to reforge the mythic Dragon Sword in order to exact revenge on a powerful warrior. Running Wild produced “The Curse of the Dragon Sword” in Boulder and Denver, Colorado, in collaboration with Blue Dragon Films.

“Late Blossom Blues” follows Welch and his manager Vencie Varnado, a Gulf War Veteran, as they balance the tight rope between business and geriatrics, between jet lag and sound check. It also paints a heart-warming portrait of Welch’s small hometown of Bruce where his daily life is still untouched by his late global fame.

“Documenting the most exciting times in the life of one of the last real Bluesmen, ‘Late Blossom Blues’ is a film of historic dimension for all music-lovers. It’s a moving account of a hard working man, who, despite all the adversaries, never wavered from his passion and waited more than 70 years to finally live his dream,” Mills said.