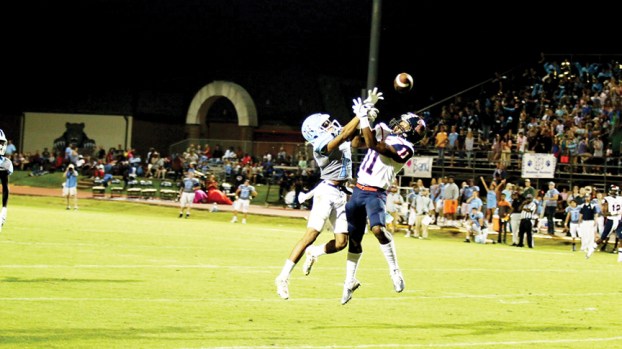 Photo by April Clopton/Brookhaven High Panther Dorian German (11) grabs for a pass Friday night in a game against North Pike.

The Brookhaven Panthers showed out in a 49-12 district win at North Pike Friday night, playing spoiler to the Jaguars’ homecoming festivities.

Quarterback Sevante Quinn connected on 8-of-13 passes for 168 yards and three touchdowns. Quinn is now 37-of-67 on the season with 10 TDs and only three interceptions.

The Panthers’ running game was also hitting on all cylinders. Senior Damarrell Leggett ran the ball 11 times for 151 yards and three scores. Leggett has now rushed for 631 yards on the season and has racked up 10 TDs. He leads the district in rushing yards, total points and touchdowns.

The Panthers kept a hot Alijah Martin from making much of an impact for North Pike. The quarterback leads the district in passing yards with 1,024 yards, but he managed only 75 against Brookhaven.

Panther kicker Tyler Mixon was perfect on the night with seven PATs.

Friday’s win puts Brookhaven at 1-0 in district play and 4-1 overall. Next up for the Panthers is a home district game against Laurel.

Game recap
Brookhaven scored first on a 15-yard run by senior Damarrell Leggett with 9:18 on the clock.

With 5:14 left in the first, North Pike’s Tyric Miller ran in from the one-yard line. Old Brook blocked the point after attempt, and the Panthers led 7-6.

Ole Brook would respond with a touchdown of their own when junior Sevante Quinn threw a 29-yard touchdown pass. BHS made the point after and took a 14-6 lead into the second quarter.

With just over a minute played in the second quarter, North Pike scored its final points of the night as Alijah Martin ran the ball in for a 17-yard touchdown. North Pike missed the point after and trailed 14-12.

Ole Brook once again responded as they scored on a 38-yard passing touchdown to take a commanding 21-12 lead, after making the point after. The Panthers scored once more in the second on a 15-yard run by Leggett. BHS led 28-12 heading into halftime.

The score remained the same heading into the fourth quarter. Facing a fourth and long, North Pike decided to go for it, but was denied by Ole Brook’s defense.

BHS added to its lead when Leggett busted free for a 50-yard touchdown. The Panthers scored their final points of the night on a 30-yard touchdown run by Jaquarius Edwards, making the score 49-12.

ELLISVILLE – The No. 20 Copiah-Lincoln Community College Wolves (2-2) were haunted by turnovers and struggled finding an answer to... read more