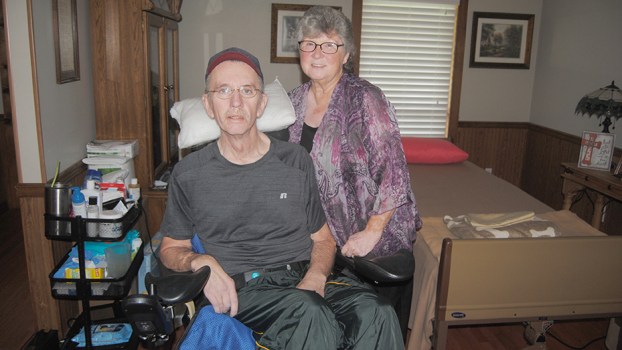 Photo by Matt Rushing/A benefit will be held Saturday for Eddie Douglas, a Patriot Guard Rider who was paralyzed in a crash after attending a funeral. Pictured are, from left: Douglas and Neomia Boyte.

Eddie Douglas has usually been on the giving end of good deeds. It’s bittersweet to be the receiver this time.

Douglas, 60, was paralyzed from the neck down after a motorcycle collision on Dec. 28. Initially he wasn’t given much hope to survive the crash, or if he did, to be able to walk again.

On Saturday, starting at 10 a.m., Douglas’s friends and family are hosting a benefit for him at the Brookhaven Building on Beltline Road.

“This isn’t something you’re necessarily glad to be in,” Douglas said. “I’m ready to see my friends and family, but I’ve never asked anything from anyone in my life.”

After nine months in various hospitals, Douglas has recently come home. He is a part of the Patriot Guard Riders, a motorcycle group that provides support for fallen heroes such as police offers, firefighters, first responders and veterans.

“It’s an honor for us to be able to do that and it doesn’t cost the families anything. It’s a payback for those of who didn’t serve to say thank you to those that did serve.” Douglas said. “We provide flag escorts from the funeral home to the gravesite.”

On the day of the crash, Douglas was riding his motorcycle on Hwy. 84 West, on his way home from a funeral he attended in Laurel.

As he was nearing the Collins intersection, a car that had crossed traffic and was driving on the wrong side of the road hit him.

“I went across my handle bars, across the hood of their car and underneath a truck,” said Douglas. “I remember every moment of it. I remember hitting the ground and having that feeling of not being able to move.”

Tragedy didn’t stop after the crash in December. A week later, three of his friends were traveling to hospital to visit him. A car ran a stop sign and blindsided them. Two of his friends died that day.

Douglas said that has hurt him more than his accident. “My buddy lost his wife and best friend in that wreck,” he said.

The good news is that Douglas has regained sensation in his arms and legs. He said his faith is what keeps him going.

“God has a purpose left for me here or I wouldn’t be here. I’ve wondered ‘Why me Lord?’ But then I thought, ‘Why not me?’ “said Douglas. “I used to think life was easy being a Christian, but it’s not. Nowhere in the Bible does it teach that it’s easy. Look at the life Jesus lived. He didn’t have an easy way out. I just hope I can display some of the strengths displayed in the Bible for Christians and non-Christians.”

The benefit starts at 10 a.m. There will be a live auction at 3 p.m. Jambalaya, pulled pork sandwiches, hamburgers and hot dogs are foods that will be available for purchase.

There will also be live music, a cakewalk, cake sale and a poker run.

The Brookhaven Building will be opened Friday from 4-8 p.m. to bring donations for the auction.