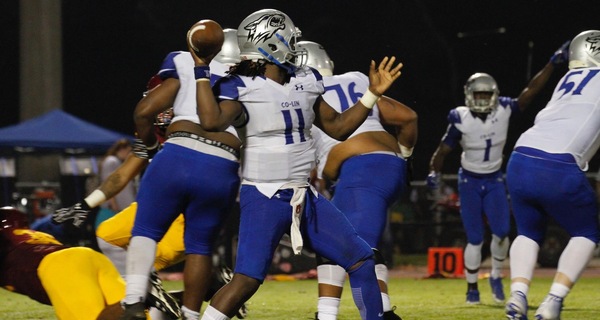 Thursday will be the 78th meeting between the two programs dating back to 1950. Co-Lin currently leads the all-time series 45-29-3, a record that was improved last season after a thrilling come from behind Co-Lin victory. The Wolves enter the contest on a two game losing streak after a 35-10 loss on the road to Jones County Junior College last week. East Central is also coming off a loss as the Warriors fell to Gulf Coast Community College 48-25 on the road last week. Fans can watch the action live at ecccathletics.com or listen live through two outlets, colinathletics.com or WMJU 104.3 FM in Brookhaven.

Co-Lin’s rushing attack stalled last week against JCJC as the Wolves only posted 42 yards on the ground, much less than the 203.6 that was averaged through the first three contest. However, look for freshmen running backs Rico Owens and Deion Dampier to continue to get touches against the Warriors as the Wolves hope to rebuild confidence in the ground game. Also in rotation in the backfield is Carlos Ransburgh, a sophomore from Jackson, Miss., who had five touches in the loss to JCJC.

The Wolves’ passing game was hit or miss last week as Co-Lin racked up 211 passing yards through three passers. Woody Barrett was 9-for-23 on the night for 127 yards and one interception, Hayden Davis was 6-for-13 for 49 yards with one interception, and Nero Nelson, a wide receiver, threw Co-Lin’s lone touchdown, a 35-yard toss to Kobe Gates, on a “double pass.”

Co-Lin’s special teams was solid last week as Griffin Sublett was 1-for-1 on field goals and extra points. The sophomore also averaged nearly 35 yards on eight punts, six of which landed inside the 20-yard line.