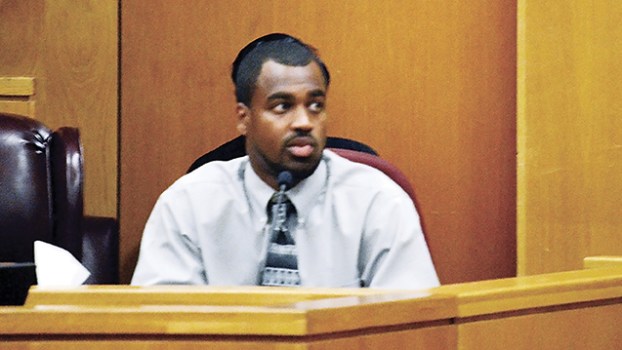 Defendant in capital murder trial: ‘I loved him with all my heart’

The defendant in a murder trial took the stand Thursday in Lincoln County Circuit Court, telling the jury how much he loved the little boy he considered his son.

Jamaal Brown, a registered nurse from Brookhaven, is on trial for the 2014 death of his finance’s 13-month-old son, Preston Jude Heath.

Though a capital murder trial, the district attorney has said he will not seek the death penalty if Brown is found guilty.

Erin Reynolds was pregnant with Heath when she started dating Brown, a father of four, after they were introduced by a mutual friend.

“I would introduce Preston as my son, even though he was not my biological son,” Brown said. “I loved him with all of my heart.”

Heath was born in December 2012. Brown and Heath’s mother got engaged on June 7, 2013. Heath and his mom moved in with Brown in January, shortly before the toddler died Jan. 23.

On the stand, Brown described the events leading up to Heath’s death.

“I picked him up and carried him to the bathroom with me. He was playing with his toys and I was cleaning. He then began messing with the shampoo bottles by the bathtub, while I was still cleaning. I could see him in my peripheral vision,” Brown said. “Next thing I know, he had tripped on his toy and hit the toilet on the back of his head.”

Defense attorney Tom Fortner asked Brown if he had ever been physically abusive towards Heath or towards any of his other children.

Brown described Heath as lying flat on his back when he heard him hit his head.

“I picked him up and me being a nurse, I assessed his eyes,” said Brown. “I held him in my arms and walked him back to the bed and he eventually stopped crying.”

This was at 11:30 a.m. Brown said Heath was coherent and seemed fine.

“I checked on him periodically to make sure he didn’t fall asleep,” said Brown. “He was fully alert and oriented to his surroundings.”

Around 4 p.m., Brown said Heath began to favor his left side. He fixed Heath some juice and gave it to him, but when he tried to get Heath to drink it, he dropped the cup.

“I asked him if he was OK and he fell limp in my arms,” said Brown.

Brown rushed Heath to the emergency room at King’s Daughters Medical Center just a few minutes from his home, because he said it was quicker than waiting on an ambulance.

While at the hospital, Brown remained with Heath while medical personnel rushed to save his life.

“I answered any questions from the doctors and social workers,” said Brown. “I was scared my son was in trouble.”

Brown texted Reynolds, who was working her shift as a nurse in the neonatal intensive care unit at University of Mississippi Medical Center, to let her know what was going on.

Heath was transported to UMMC where he was pronounced dead that evening.

“I talked to Dr. (Scott) Benton as UMMC. I answered his questions with the same statements I have made today,” Brown said.

Benton said during testimony that the injuries Heath suffered “is far more extensive inside his body than a child would receive from a fall.” He said the child’s death was caused by “high-force injuries, severe swelling and brain injuries.”

Brown led Capt. Clint Earls, a detective with the Brookhaven Police Department, through his house and described the incident to him.

Brown moved to New Mexico in the summer of 2014 and learned he was indicted for Heath’s death in September that year.

Prosecutors questioned Brown about his recollection of so much detail about the incident, when he could only see the child in his peripheral vision. They also questioned how Brown knew Heath hit his head on the toilet.

The state showed evidence of contact points on Heath’s body, pointing out multiple bruises to the jury.

Brown said he noticed only two points of contact when he picked up the toddler after he said he fell.

“Some of these images show hemorrhaging of the eyes, but you’re claiming he could recognize you and cartoons,” said District Attorney Dee Bates.

Bates asked Brown if he struck the child.

“I did not, I loved that child,” Brown said.