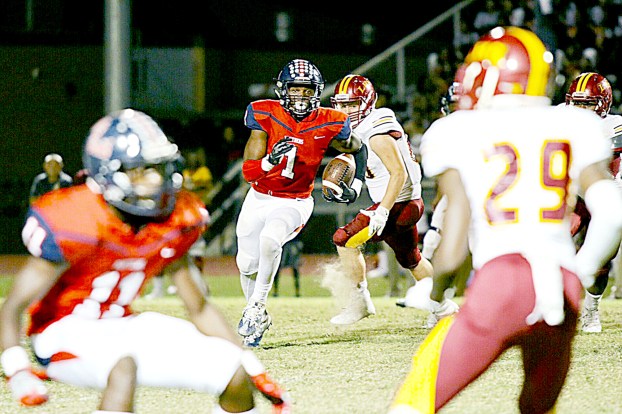 Photo by April Clopton/Brookhaven senior running back Damarrell Leggett (1) runs for the endzone in the Panthers’ 42-35 win against the Laurel Golden Tornados. It was the first time BHS beat Laurel since joining the same region in 2013, and Laurel’s first region loss since October 2014.

Big play, after big play, after big play. The Region 3-5A heavyweight showdown between Laurel (3-3) and Brookhaven (5-1) lived up to all the hype Friday night on King Field. The Panthers jumped to a big halftime lead and then held off a Golden Tornado charge in the second half to complete a 42-35 victory.

The fans in the packed home bleachers were on their feet as the halftime horn sounded and the Panthers took a 28-7 lead into the break. The Panthers grabbed that advantage with a litany of dynamic scores. The first Panther touchdown, a 3-yard Damarrell Leggett run, was set up by a 74-yard interception return by Byrion Robinson. Leggett scored again the next time he touched the ball, this time on a 71-yard run that put Brookhaven up 14-7. Sophomore running back Jaquarius Edwards would put Brookhaven ahead 21-7 with 5:28 remaining in the first half when he rumbled through the Golden Tornado defensive line for a 21-yard touchdown run.

The score was the culmination of a 95-yard drive that saw Brookhaven convert multiple third down plays. Head coach Tommy Clopton would go deep into his playbook for the final score of the half as Brookhaven perfectly executed a hook-and-ladder play with 1:20 remaining in the second quarter. Panther quarterback Sevante Quinn hit junior wideout John Hilbert in the flats and as the Laurel defense converged, Hilbert hit Leggett with a perfect lateral that turned into a 60-yard scoring play.

As good as things were in the first half for Brookhaven, they were just as bad for the Panthers in the second half. Laurel, the defending 5A South State champions, rode the strong legs of junior running back Zias Perryman to get back into the game. Perryman scored three rushing touchdowns in the second half, including a 68-yarder and a 3-yard run that tied the game at 35 with 11:56 remaining in the game.

The game was won with a drive and a defensive stand by Brookhaven in the fourth quarter. The game-winning drive by the Brookhaven offense saw the Panthers use a jumbo-package to convert a huge 4th-and-2 at midfield. Quinn would cap the drive with a 10-yard scoring pass to Hilbert with 4:42 remaining in the game. Panther kicker Tyler Mixon would finish a perfect 6-of-6 on PAT kicks. Laurel would then move their final possession down to inside the Panther 10-yard line, but on 4th-and-goal from the 8-yard line the Panther defense would stop a reverse by Laurel and seal their victory.

“I’m proud of our defense for standing tall inside the 10-yard line on their last drive,” said Clopton. “I’m proud of all of our guys, this was a team win.”

The win was the first for Brookhaven over the Golden Tornadoes since moving into a region with Laurel in 2013.

Brookhaven travels to Forest Hill for a 7 p.m. kickoff next Friday night.

A jury Friday found Jamaal Brown not guilty of murder in the 2014 death of his fiance’s 13-month-old son, Preston Heath.... read more