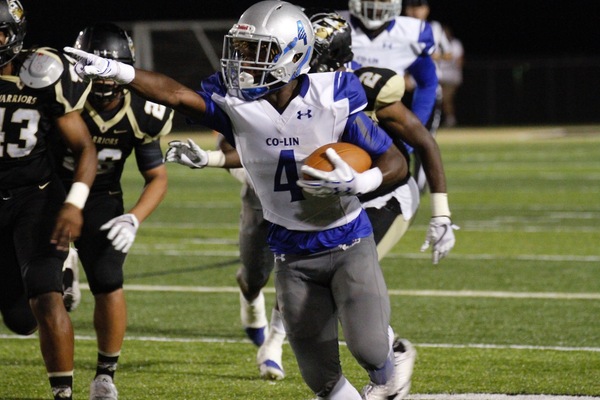 The Copiah-Lincoln Community College Wolves ended a two game losing streak with an exciting win over the East Central Community College Warriors, 27-24, in Decatur Thursday night. The win is Co-Lin’s first MACJC South Division win in 2017 and moves the Wolves to 3-2 overall on the year and 1-2 in the division. East Central is now 1-3 on the season and 0-3 in the South.

The Wolves outgained the Warriors 419 yards to 213 yards, with a large amount of those coming in the first quarter for Co-Lin. The offensive attack was balanced early on as the Wolves marched down the field for a 69-yard drive to open the game. Unfortunately, the Wolves could not punch it in from five yards out and settled for a field goal from Griffin Sublett.

After another quick stop from Co-Lin’s defense, the Wolves regained possession at their own 44-yard line. Co-Lin quickly capitalized as Woody Barrett broke for an 18-yard rush. The following play, the freshman QB found TK McClendon in the middle of the field for a 43-yard touchdown. Sublett’s point after attempt gave the Wolves a 10-0 lead with 6:55 remaining in the opening quarter.

East Central responded later in the first with two big plays from Mario Asagunla, the Warriors QB. Asagunla connected with Chris Deloach for 27-yards, and followed that with a 35-yard toss to Nigel Wood that landed the Warriors on Co-Lin’s five-yard line. East Central’s Mikell Daniels plowed forward for the remaining five yards to cut into Co-Lin’s lead. Co-Lin led 10-7 after Zach Engell’s point after attempt with 4:36 left in the quarter.

The Wolves bounced back as Co-Lin strung together another impressive drive. The 65-yard trek down the field was capped off by an eight-yard strike from Barrett to Jemarcus Weatherall. The extra point stretched the Wolves’ lead to 17-7.

East Central got some momentum early in the second quarter after Asagunla found James Smith III out of the backfield. She short screen pass proved successful as Smith broke a tackle and took it 80-yards for a touchdown. The score and PAT cut the Wolves’ lead to just three, 17-14.

With 5:37 remaining in the half, Co-Lin took over at their own 14-yard line. The Wolves took the ball 86-yards on 12 plays to extend their lead. Barrett connected with Weatherall for 30-yards and had an 18-yard rush from Deion Dampier. The drive ended with a six-yard rush from Barrett. Sublett tacked on the extra point and Co-Lin took a 24-14 lead into the locker room.

In the third, the Warriors caught another glimpse of hope after Keonte’ Daniels picked off Hayden Davis. The freshman took it 33-yards to the end zone, and cut the Wolves’ lead to just a field goal, 24-21.

The Warriors made a quick stop on Co-Lin’s ensuing drive and tied the game 24-24 with an Engell field goal from 36-yards out with 36 seconds remaining in the third quarter. The field goal sealed a 77-yard drive for the Warriors.

The fourth quarter was back-and-forth until Davis led the Wolves on stellar 72-yard drive. With just 1:48 remaining in the contest Sublett drilled a 45-yarder to stretch the lead to 27-24. East Central fumbled the ensuing kickoff and the Wolves recovered to seal the victory.

Barrett led the Co-Lin passing attack as he was 11-for-25 for 162 yards and two scores. Davis was 3-for-4 for 44 yards with one interception. Dampier posted 81 yards on the ground on 18 carries. Barrett followed with 70 yards on 12 carries and Rico Owens had 34 yards on four touches.

Weatherall led the Co-Lin receivers with 51 yards on 4 receptions with one touchdown. Jalen Browder had 50 yards on three receptions, while McClendon had one touchdown and 43 yards.

Asagunla was 11-for-23 in the air for 199 yards and one touchdown for ECCC. Smith led the Warrior’s ground game with 32 yards on 12 rushes. Smith also led the Warriors in receiving yards with 80 yards one reception.

Defensively, Paul Wilson, Sh’Mar Kilby-Lane, and Charles Cameron who all posted six tackles led Co-Lin. Barry Howard, TJ Gray, Jonathan Lolohea, and Didravious Henery all had one sack each in the contest.

Tanner Bullock, who finished with 11 tackles, led the Warriors.

Co-Lin is back in action next Thursday as the Wolves host the Hinds Community College Eagles. The game is set for a 7 p.m. kickoff and fans are asked to wear white.

The Lady Panthers went into Thursday night’s game against North Pike needing to win by more than three points to... read more