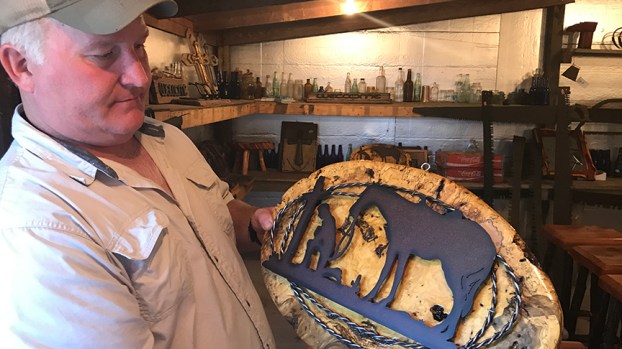 Photo by Matt Rushing/Kevin Smith displays one of the pieces that he’ll be selling at the Ole Brook Festival Oct. 7.

A lightning strike opened up new doors for Kevin Smith.

Three years ago, while Smith was sitting at his house on Zetus Road, lightning struck a tree in his front yard.

Smith didn’t think too much of it originally. He cut the wood up and pushed it off into the woods nearby.

After some time, he decided he would use the wood.

“We had some old barstools in the house that were old and needed to be replaced,” Smith said. “I took a power saw and started cutting the tree up. I wielded it down with a skill saw. Next thing you know, I had made some barstools from a tree that I originally thought was a lost cause.”

Smith’s wife, Neesa, was traveling the day her husband made the furniture.

“When I got home, I saw what he had done and I told him to make some more stuff,” she said.

Smith said she shouldn’t have said it, because he did just that.

He started collecting tools at auctions and buying all the equipment he needed to make the woodwork better.

He even bought his own sawmill.

“We started rolling then,” Smith said. “Me and my son Austin would do the woodwork and my wife would be responsible for painting and finishing the wood.”

Cedar — his favorite — is the easiest to work with. Hickory is the most difficult.

“I build cedar chests. I’ll take antique windows and make them into desks or tables. We build bird houses, stools, crosses, hat racks, headboards, benches and tables. If you can name it, we can make it,” said Smith.

They travel to flea markets and festivals in the surrounding areas to make sales.

Smith prides himself on his resourcefulness. He doesn’t waste any part of a tree.

His designs are unique.

“I envision what I want to do. I’m not one of those guys that will build what other people want me to. I just do what I like, it’s my signature,” he said.

Smith, who has worked at the Walmart distribution center for over 30 years, said he plans to keep woodworking until the day he dies.

Smith and his family will have their own booth at Ole Brook Festival Oct. 7. The festival opens at 8 a.m. along Railroad and Cherokee Streets in downtown Brookhaven.